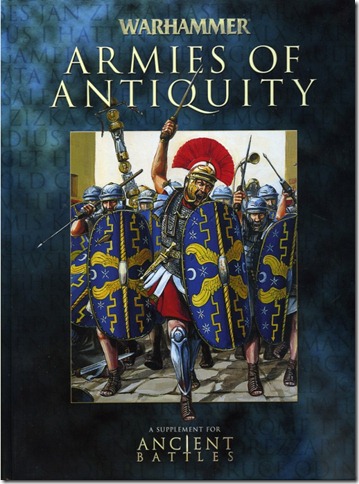 Covering 100 armies from the early classical period to the late medieval. A list of which armies are available is included here.
These lists use a new consistent points system so in the tradition of WAB you can use all these lists freely against one-another but not against any of the existing supplements. Apparently an army of 2800 points in the new points system is equivalent to 2000 points in the old points system. They are ‘bare bones’ lists, so no historical background or pictures of nicely painted wargames figures. This book is for gamers only. In many cases the army lists have been simplified, so to illustrate this lets compare Early Imperial legionaries from both the rule book list and the list in armies of antiquity.
In the most basic way a veteran legionary now costs 24 points compared to the old 20 points in the rulebook. But also gone are the options for heavy armour and javelins. The javelin option is now available in other list, the Middle Imperial Roman where legionaries are generally of less quality and lighter equipment than in the Early list.
Many of the old special to army special rules have gone (no flaming rollers for a Spartacus army for example) and the Samurai list has been toned down from the old ‘Samurai are supermen’ list. All of the army special rules come either from the rule book or this book, so you don’t need to own a copy of your opponents army list book to understand what rules they are using. I like it, IMHO it has moved away from the extremes of army special rules to more of a middle ground and follows the lead started in WAB2, less of characters dominating the game to a good solid ancient wargame with some special rules to give armies unique character.
One of my favourite lists is the Galatians, where all the warriors can be Frenzied making them; lethal in combat, very difficult to control and immune to Panic tests. This is going to make them a very unusual army to use.
A quick read through has found a couple of typos, for example the crew of Late Roman artillery are listed as 5 points each, where in the notes alongside they are listed as 10 points. But that is simple, the cost for extra artillery crew is standard at 10 points, so just ignore the 5 points cost. It will be errataed in due course. Also WHH may also publish some army lists which did not make into this book on their web site in pdf format.
The book also includes some new rules but not many. One of the things I really don’t like is that the additon of characters to model (chariot or elephant for example) gives it a model + character abilities. So an Egyptian chariot with character mounted now will shoot 4 times instead of the standard 2. It seems to go against the general toning down of characters in WAB but hey thems the rules (unless you make a house rule about it of course).
Posted by Veni Vidi Vici at 10:05