The Die is Cast Sassanid Persians vs Late Romans

After the Society of Ancients battle day, I had the start of a Late Roman army which I have expanded with some artillery, skirmishers and some extra-heavy cavalry. So John Holroyd (my partner in developing TDIC v5) and I decided to have a game against his Sassanid Persians when we were meeting up to see the latest proof copy of TDIC – it is shortly going to get printed by Amazon.

Three elephants, three units of peasant levy infantry, four units skirmishing cavalry (all with bows, some with javelins as well), three units of extra-heavy cavalry (with bow and lance) and a unit of cataphracts. Although his infantry was rubbish, Johns advantage was in his cavalry, more heavily armoured and better armoured than mine.

The Late Roman plan was to shoot down the enemy skirmishing cavalry, gain the advantage in mobility (basically the advantage to force the enemy either to move first or second) and then to hit with superiority at a given point.

Initial deployment of the armies, with my Romans at the bottom and the Sassanids at the top. You can see that the Roman line is considerably longer than the Sassanid. In my army the artillery have only been undercoated (they are white) and the same with Johns peasants. 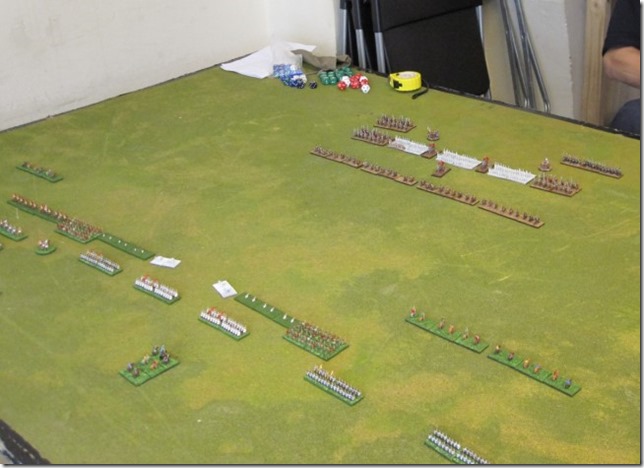 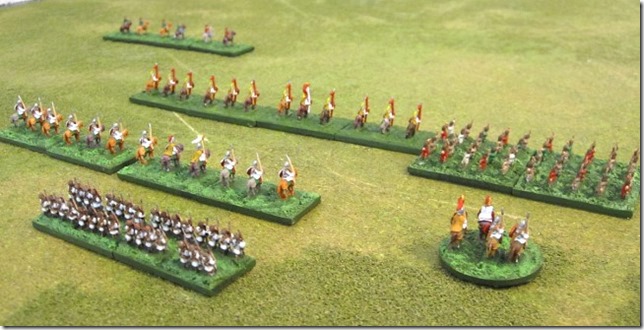 The Sassanids. Horse archers to the front, elephants mixed in with the infantry, two units of extra-heavy cavalry in the distance. 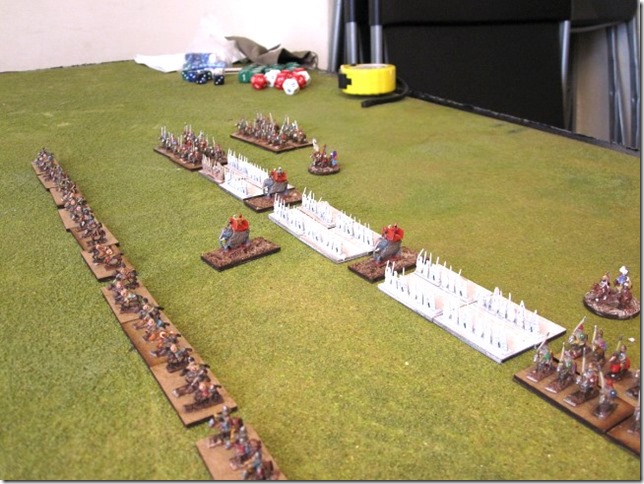 The starting move on the Roman right. Both sides cavalry advance and the skirmishers exchange shots, both sides lose a base of skirmishers. 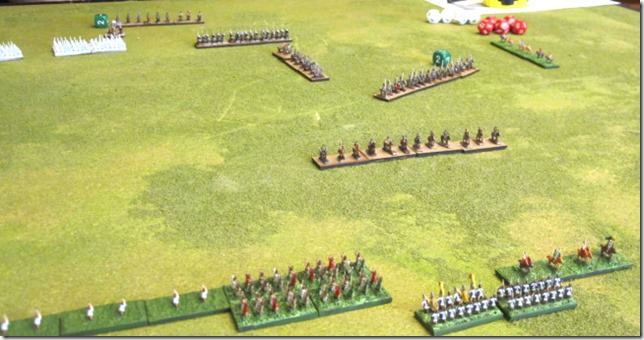 And the final scene on the right. The Sassanids broke through, destroying the Roman light cavalry, a unit of auxila, a unit of legionaries and in this picture the Sassanid cataphracts about to break through and run down a unit of archers. So a total of five Roman units lost.

First move on the Roman left. A general advance but now the Roman light cavalry can force the Sassanid extra-heavies to move either first or second because of their greater speed. 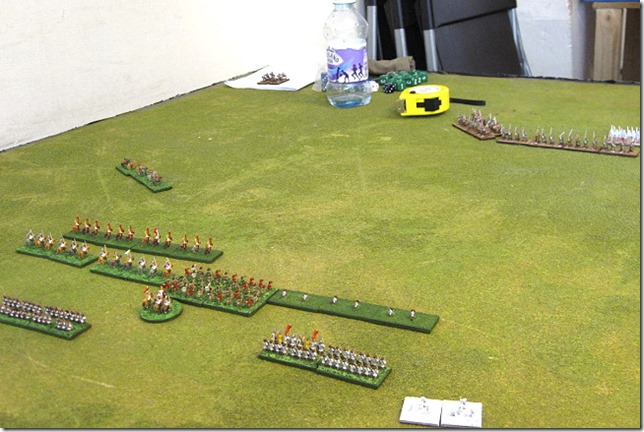 End on the Roman left. With superior numbers, the Romans destroyed a unit of extra-heavy cavalry and the others wisely decided to move away. One elephant has been killed and the other two wounded – another was killed when the remaining elephants changed some legionaries. One unit of the levies has been destroyed and another forced to retreat. The Romans have taken some losses but only the odd casualty here and there. 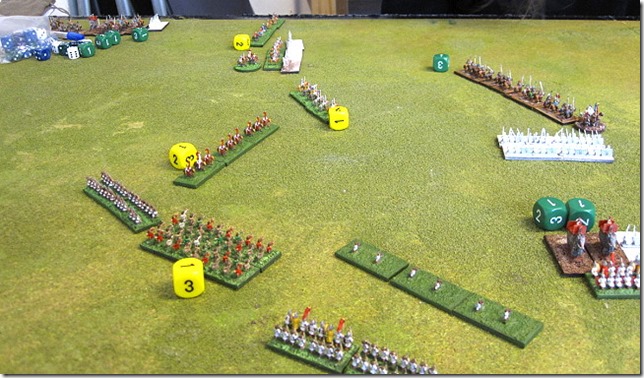 The end view of the battlefield. In the centre another elephant dies and the levies are routed. So with the Romans winning on the left and centre, its a win for the Romans but at the cost of the entire Roman right flank.

It was noticeable how heavily armoured cavalry really cuts down the casualties from shooting. Most of the time shooting (on both sides) needed a lucky one to hit. So lots of dice being rolled but causing few hits. On the left the combat between the Sassanid and Roman extra-heavy cavalry was an even match, but throwing in the supporting Roman heavy cavalry swung the balance and resulted in a Roman victory. The Sassanid cavalry overwhelmed the Roman infantry (acting as little more than speed bumps) but since they were in the main very small units, few actual bases were lost. The game lasted about two hours. The rules printed by Amazon are a great improvement in both appearance and layout and people who have already bought a copy of the rules will be sent a new copy free of charge.