One game played so far of Clash of Empires (CoE) ancients rules. We played Imperial Romans vs a Gallic army.
I found choosing an army easy and good. Core choices are the standard troop types for an army and for every core choice you pick you can have either a support or skirmish choice - there might be specific limitations you have on those.
Units are limited in size to a specific range of numbers in a unit. All this limits what you can choose and to me makes for more sensible army selection.

Choosing terrain, looks to me like tables would be very full of terrain.

Game play, manoeuvring easier than in Field of Glory, I would quickly get used to it.

Shooting, did not seem that bad. Since only the front rank of skirmishers fire at full effect (the rest at half effect) it is not as bad as it was under WAB. Pila are used as a shooting weapon just before combat (just like my rules) not terribly effective in the main, I think my Gauls took a wound about 50% of the time.

Combat, only really between legionaries and warband and the legionaries got beaten. Reason, the Gauls get 50% bonus for their attacks because they are charging, the Romans get only the front rank fighting (because they have been charged) and no expert swordsmen rule (only in 2nd round of combat). And this is the biggy because it is IGoUGo the warband gets to hit first and those figures they kill will not fight back. I did not like the effect and I think it is because that charging warband has too many advantages. To my mind a significant change would be to allow as default all combat to be simultaneous (perhaps there need to be exceptions to this) because giving bonuses for charging and letting the chargers kill enemy without reply makes them too damn good. So thats the biggy, remember only one games experience.
Posted by Veni Vidi Vici at 10:23 No comments:

Blitzkrieg Commander Germans vs US

OK we experimented last night with an attacker/defender game. Scenario 2 in the book, 2000 points of late war Germans against 3000 points of (very) late war US (including M26 tanks and naval gunfire support).
In the game the US forces have to capture an objective within 8 turns whilst the defenders are dug-in and invisible until they either open fire or the attackers are within 20cm of them.
Sorry the pictures are not up to the usual standard, I used my phone camera for these.
View of the game, US paratroopers are moving through the woods on the left with the defending Germans set up in the road using the hedges as cover

Close up on the paratroopers 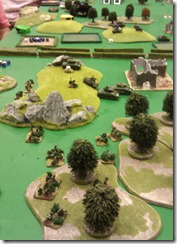 Centre of the German line, with the objective the small green field behind the hedges 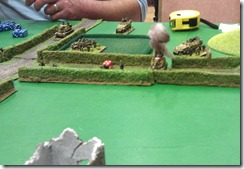 On the left M26 tanks crush the German line

The game was won by the US forces on turn 5, simply by the Germans being slaughtered. IMHO a better defence would be groups of units in strongpoints rather than strung out in a line. Also better to have German infantry well in front, supported behind by longer range weapons.
The dug in units were hard to hit (needing 6's) but because we used the optional 'keep the wounds on' rule a unit could be hit over a number of turns and gradually 'killed', it would have given the defenders a slight advantage if excess wounds had been removed. No problem with length of game, it was over by 9pm (started at 7.30pm).
15mm BKC is obviously a hit at CACK probably because of the visual appeal of the models but it also is a very balanced game. We had been playing with 6mm but I think that players will be moving up to 15mm and we are buying some more terrain (including bunkers) to give a few more options.
Posted by Veni Vidi Vici at 20:11 No comments: