The Die is Cast in 25mm Byzantines vs Egyptians 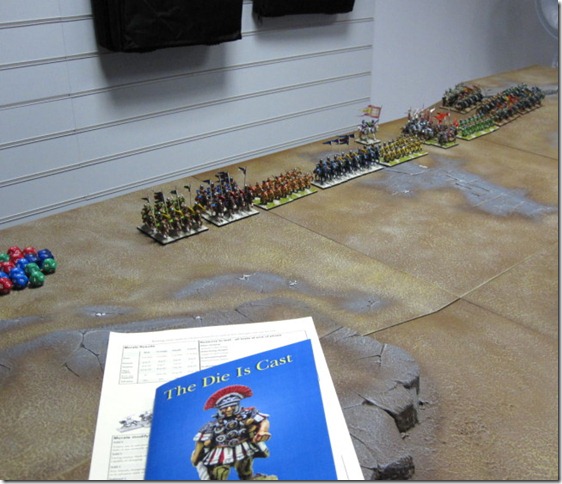 With the release of the Die is Cast rules we thought we could now have a bit of fun, playing in the scale that the rules were designed for 25mm. Taking two 1,000 point armies Nikephorian Byzantine and Fatimid Egyptian. The above picture shows the Byzantines deployed for battle; one unit of cataphracts in wedge, 3 units of extra heavy cavalry, 3 units of heavy cavalry and 3 units of foot archers.

Both armies were provided by Ian Crosby a long time WRG 6th edition gamer and a newcomer to TDIC. 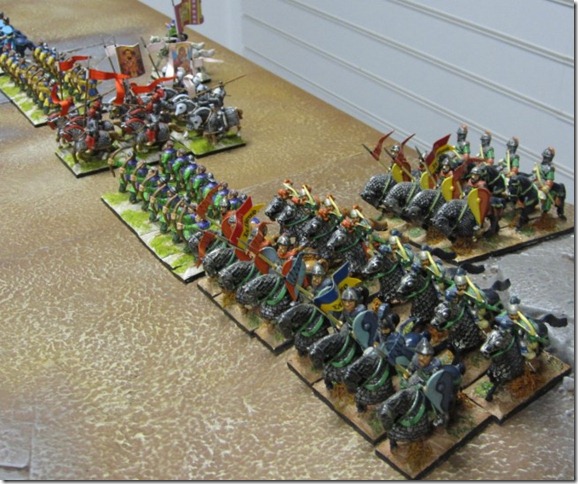 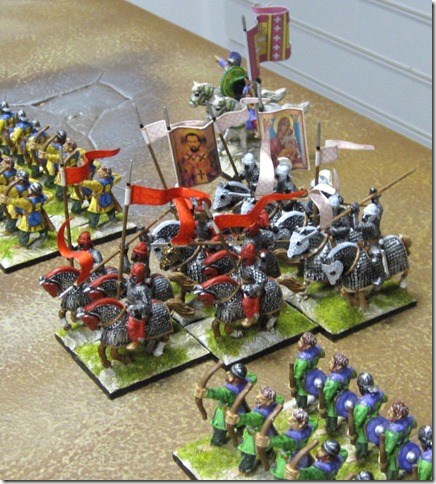 My hot unit in this army, twelve cataphracts with lances in wedge. Guard and veterans, capable of beating any other unit on the table. 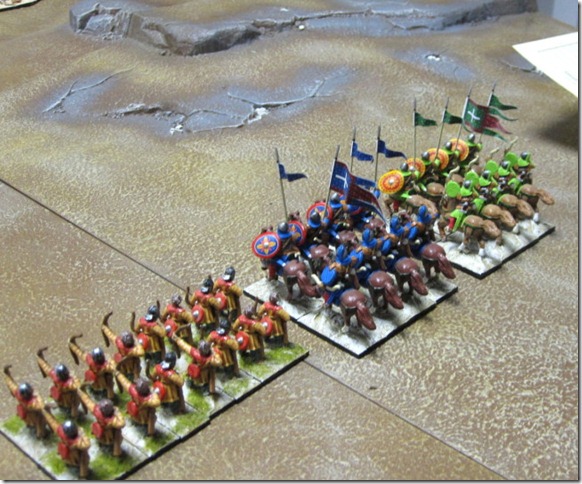 A unit of Byzantine foot archers and two units of heavy cavalry.

The Egyptian army. Three units of foot archers, two units of light cavalry, two units of elite Mamluks and four units of Askar heavy cavalry. The Egyptian cavalry units were even smaller than the Byzantines, at only six figures each. This was to prove a serious disadvantage as the game progressed. 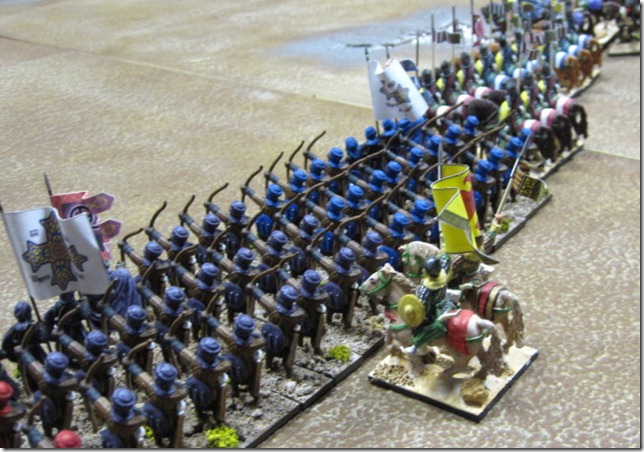 Close up on the Egyptian foot archers with the general behind them. 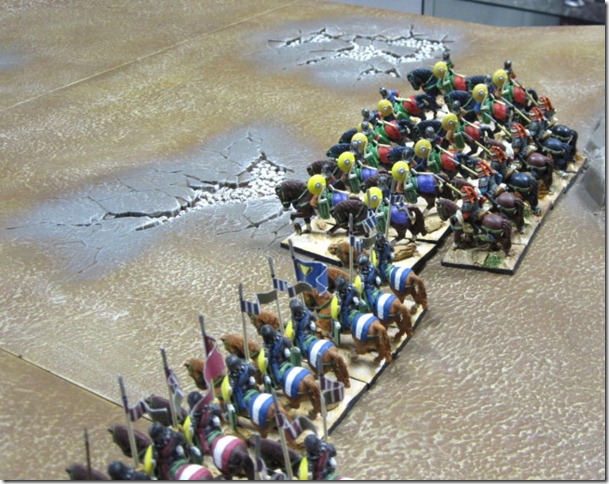 At the top of the photo, Egyptian light cavalry supported by Mamluks and Askars. 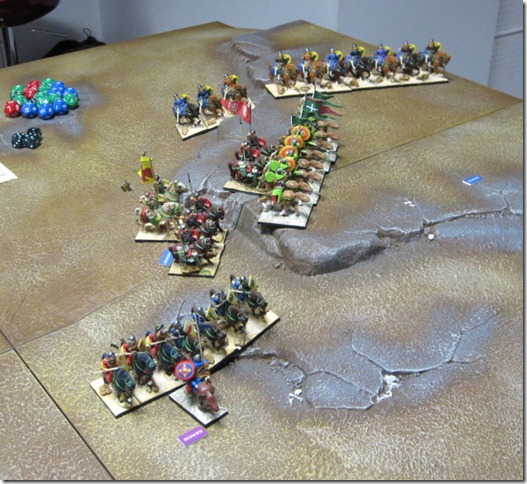 The start of the game with Byzantine and Egyptian heavy cavalry clashing. It has gone badly for the Byzantines with the Byzantine unit at the bottom of the picture reduced to only one model. But in the melee the Egyptians have been reduced to half strength preventing them from further advance. 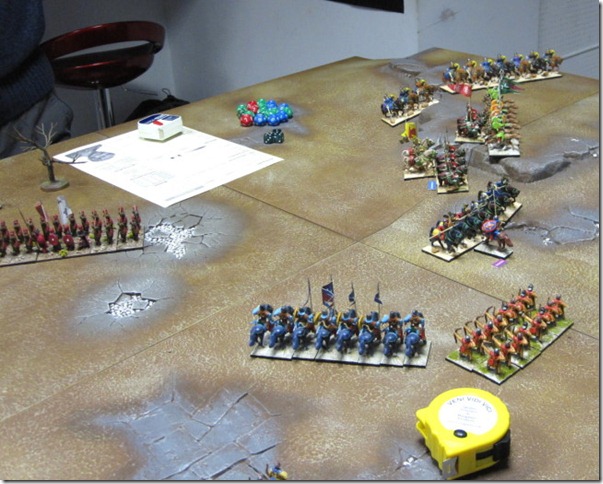 The blue Byzantine heavy cavalry are poised to launch a flank attack on the Egyptian cavalry ripping their friends to pieces.

In the centre the already damaged unit of cataphracts, charge but misjudge the distance, exposing them the fire of all the Egyptian archers. It was enough to reduce them to half strength and stop their advance.

On the left quite an even fight. On the far left lancers are fighting the light cavalry whilst the other combats match Byzantine cavalry against Egyptian lancers. 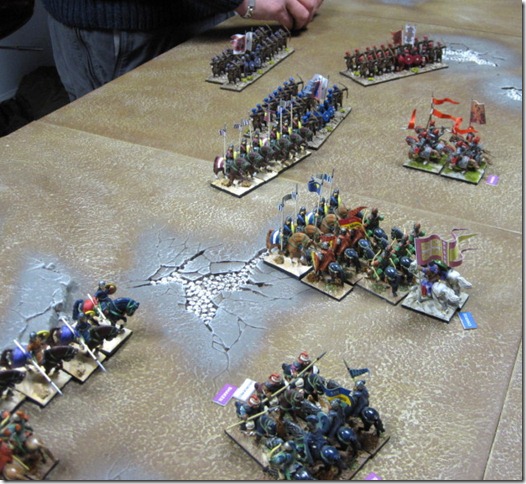 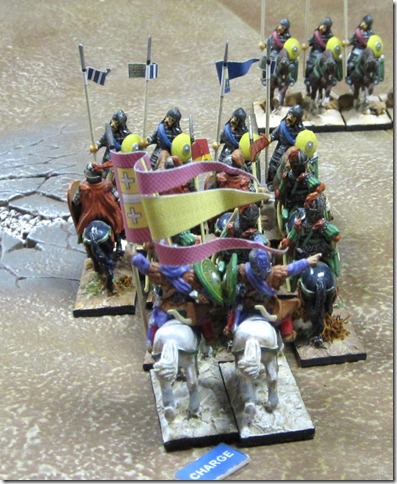 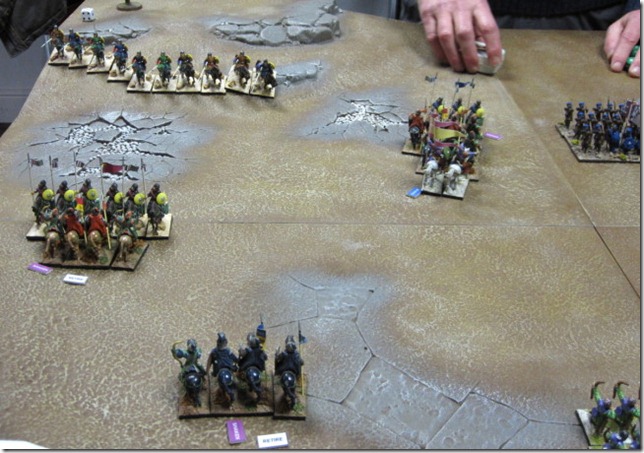 But it was a loss. Two units of Byzantine cavalry were defeated leaving only one unit led by the Byzantine general to fight on. On the far right one of the retreating units was charged by a fresh unit of Egyptian cavalry resulting in almost certain defeat. 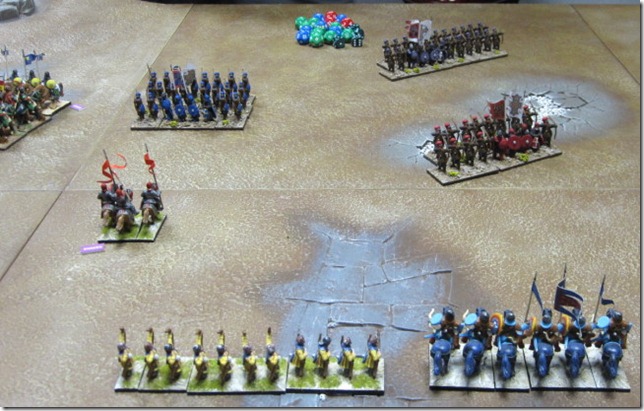 In the centre, the remains of the cataphracts gradually fall back taking casualties as they do so from the enemy archers. The Byzantine own shooting is mostly ineffective.

In the next turn, the blue Byzantine cavalry charge the red Egyptian archers. The archers failed their morale test and retreated. The charging lancers were shot to death and the last remaining hope for the Byzantines for victory was gone.

The Egyptian light cavalry on the right advances. 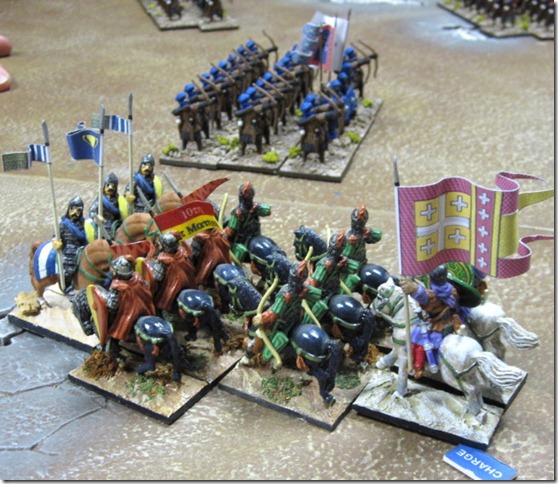 And the combat in the centre continues. 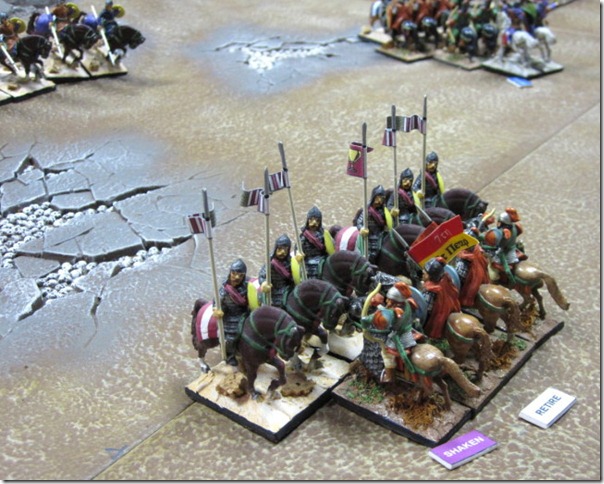 On the left the Egyptian cavalry are fighting the retreating Byzantines, break them and force them to flee.

This game was part of our introduction to Warmaster Ancients practice session at Worthy Gaming in Preston. Using a Games Workshop plastic battleboard (I hate the things) 6 foot by 4 foot and 6mm armies. 1500 points a side. The main fighting arm of the Indians were three units of heavy chariots and 2 units of elephants. Personally I try to avoid the use of elephants in WMA so had a lot more units, especially of cheap Numidian cavalry (5 units) and Gallic/Spanish warband (9 units). 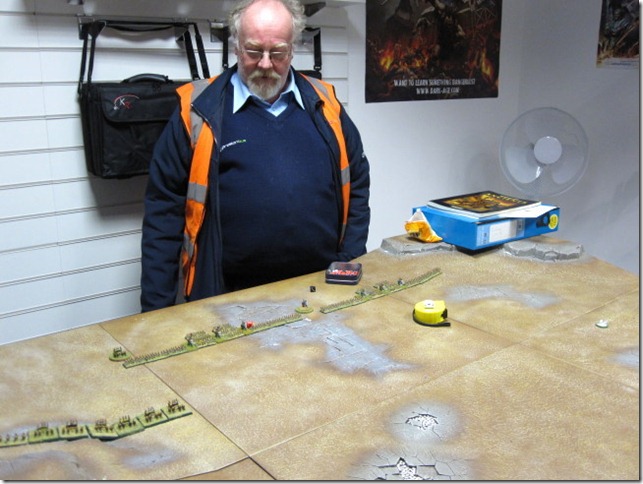 Looking at the Indian army. Chariots on the left and 2 brigades of mixed; archers, spearmen and elephants in the centre. 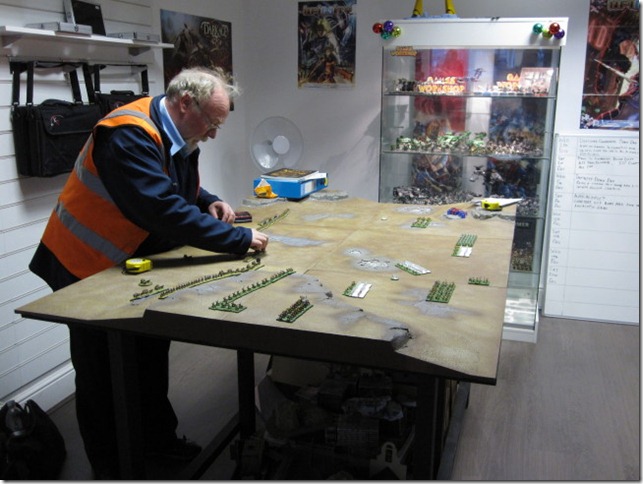 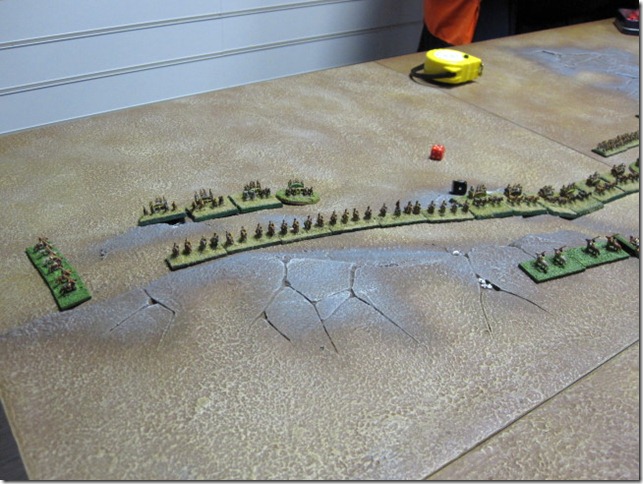 On the far left, Numidian cavalry sneak round the Indian line making the Indian movement more difficult. This is a classic tactic I use with the Numidians. 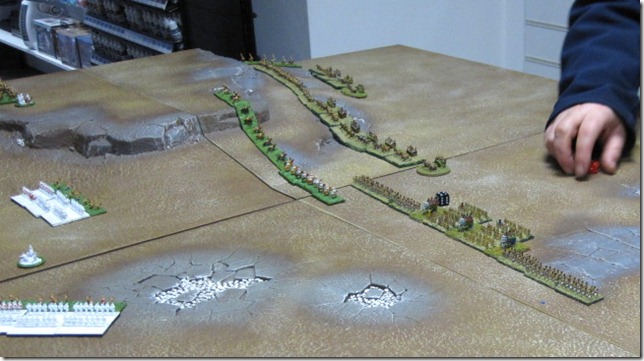 In the centre you can see the long line of Carthaginian light cavalry faced by the mass of the Indian army, including one of the mixed force brigades. 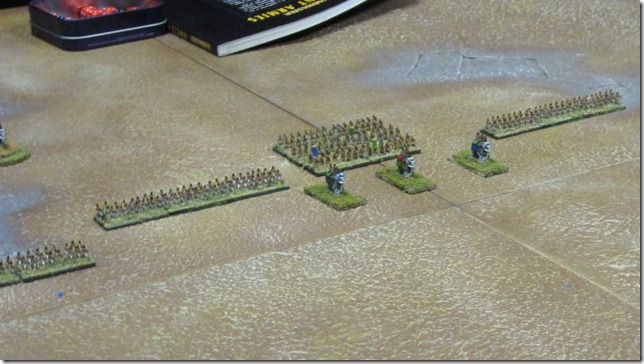 One of the mixed brigades separates with; archers on the wings, elephants and spearmen in the centre. In my opinion this formation would be better with archers backed by spearmen and the elephants acting as protection on the flanks. 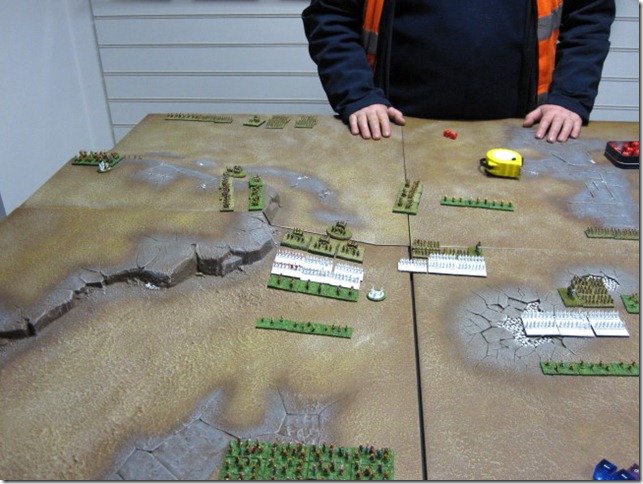 On the left, the Indian forces have been cleared away but feirce fighting is going on in the centre. The blocks of white are my unpainted Carthaginian spearmen. Nothing special with 3 attacks a base and a saving roll of 6. Apart from the Carthaginian heavy cavalry they are the best troops in my army.

Under attack from Indian chariots, spearmen and elephants, the Carthaginian spearmen quickly crumble but do destroy the Indian spearmen in the melee. 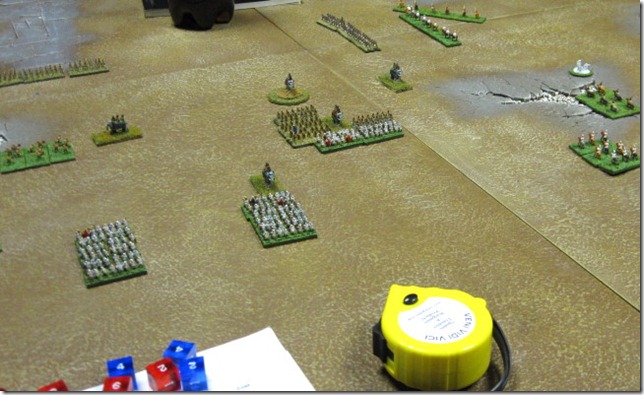 The final scene. The infantry in white are Spanish warband the last line of defence of the Carthaginian army. Things looked grim for me at this point but in one astonishing move the situation was turned and victory was won for the Carthaginians.
The reason, those huge gaps in the Indian line. In a fantastic series of dice rolls Carthaginian cavalry were able to get behind what remained of the Indian infantry and attack them both in the flank and rear. Five units of Indians were destroyed in a single turn and with the losses they had already suffered, that was enough to break the Indian army. I left the Indian elephants strictly alone as they were just too tough to kill.
Posted by Veni Vidi Vici at 22:32 6 comments: