Tim Haslam set up an introduction to the Clash of Empires ancients rules, on Saturday 8th October 2011 at the new Midlands gaming centre. Several players from around Manchester went down and here are my photos.
The outside of the gaming centre, on a new industrial estate, so it is wise to have the phone number of the centre in case your satnav cannot get you to right place. Plenty of car parking. 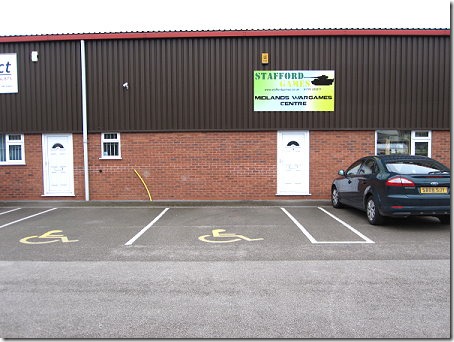 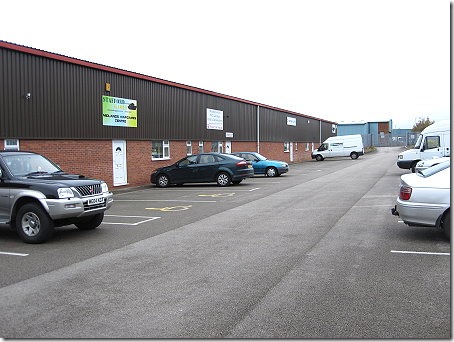 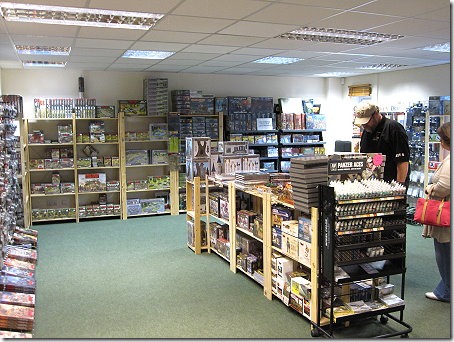 The gaming area with 17 six foot by four foot tables 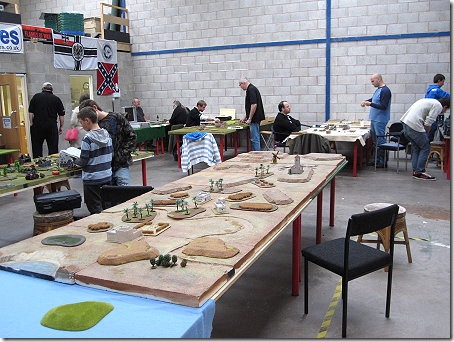 Then some photos of the games of Clash of Empires we were trying out. In this series of photos I followed a battle between Romans and a Macedonian Successor army. 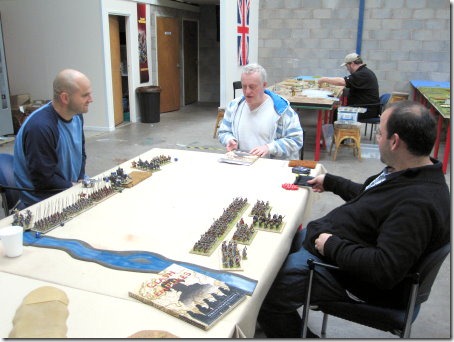 The Successor force, mainly pikes but with some good cavalry and elephants 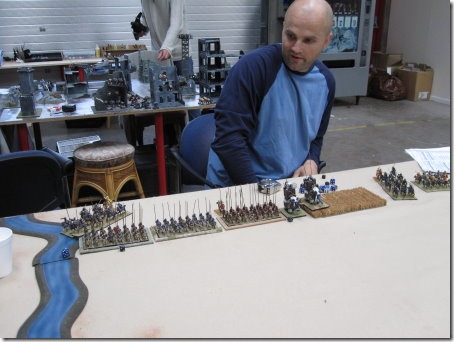 The Romans, bunched up to take advantage of their superior fighting skills. The idea being to deny the Successor advantage in numbers. 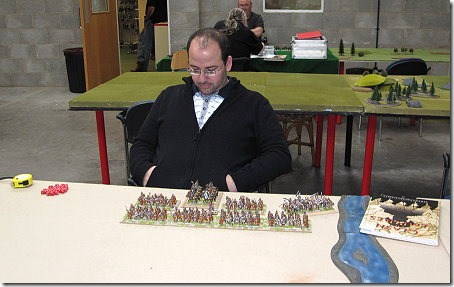 Now these are some more detailed photos, click on the links underneath the photos if you want to see the full sized pictures. 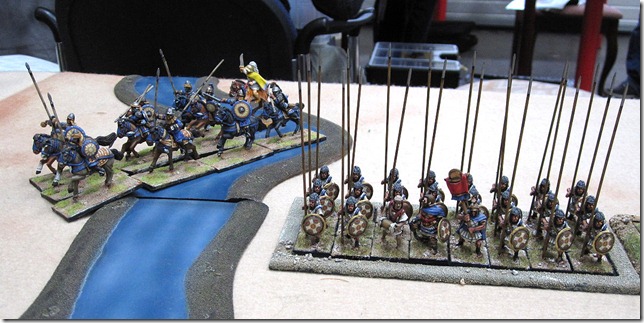 http://www.3vwargames.com/events/staffordgames2011/mids100811_15.jpg
Now the action of the game. On the Roman right, some Successor Persian cavalry came round and charged a unit of Gallic cavalry, hoping to expose the Roman rear to attack. 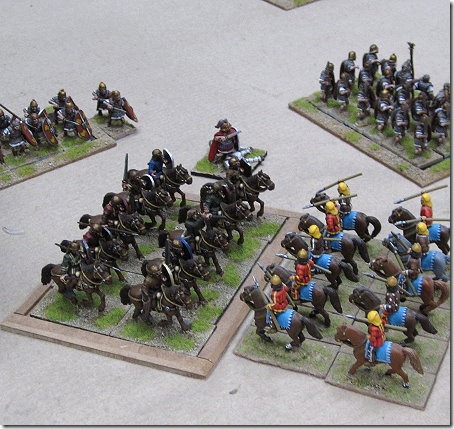 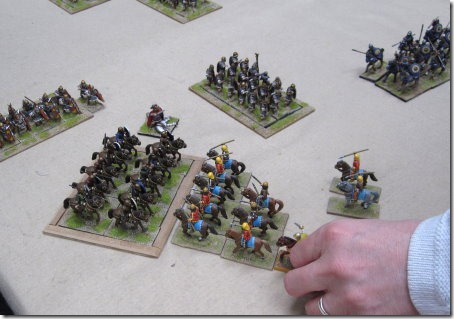 The Gallic cavalry combat result was boosted by the presence of the Roman commander and combined with a poor (high) die roll for the effects of combat, the Persian cavalry unit was destroyed and simply removed. The Gallic cavalry then had to pursue (as warband they must do this) and in turn were charged and wiped out by the Successor cavalry in the top right of the above picture. Note: in Clash of Empires wedge formation is represented by a column 3 wide, in which the first 3 ranks fight.
You can see that to be safe the Roman player formed a unit of legionaries round behind the Gallic cavalry, just in case the Gauls lost. When the Gallic cavalry were wiped out, this unit was then protecting his flank. Romans are disciplined troops and able to manoeuvre extremely well under Clash of Empire.
But now the main lines of the armies are ready to clash. The Successors have yet another unit of cavalry going round the Roman flank on the far side of the picture but the river has really hindered its movement. 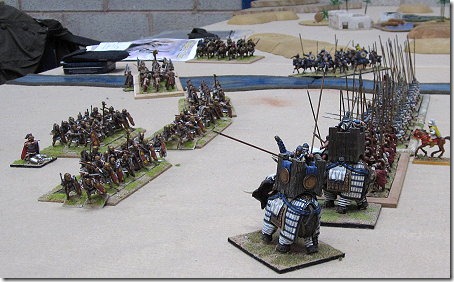 The Successor commander decided that given all the advantages of the Roman legionaries, it would be safer to charge that end Roman unit with two elephants and see what happened – this is a learning experience after all. 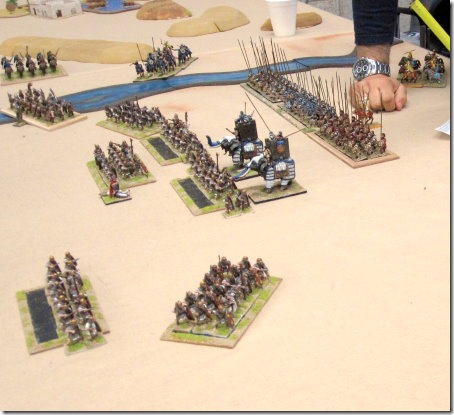 The Roman unit is hit (it failed to do any damage with their pila as the elephants charge in), take 4 casualties and do none in return. The combat result is flee for the Romans and they are caught and run down by one of the pursuing elephants (the elephant rolled a higher pursuit move than the Roman flee move). That Roman unit is simply removed and as a result of a failed morale test the rearmost Roman legionary unit also flees. 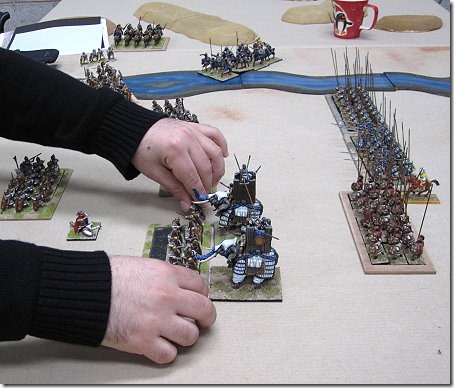 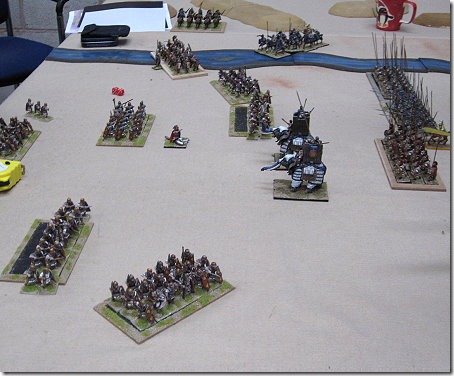 The Romans have lost one unit of legionaries, another fleeing, one unit of cavalry (the only one they had) compared to the Successor loss of a cavalry unit. There is a fairly big hole in the Roman line and 2 elephants ready to charge anything that enters it. The next move is a  Roman one  but it does look as if they are going down to defeat.
Posted by Veni Vidi Vici at 09:33 No comments:

I have just received the new plastic Wargames Factory hoplites and taken some scans of the sprues.
First of all the heads, there are 3 different types on a sprue and there were 10 sprues in the box. 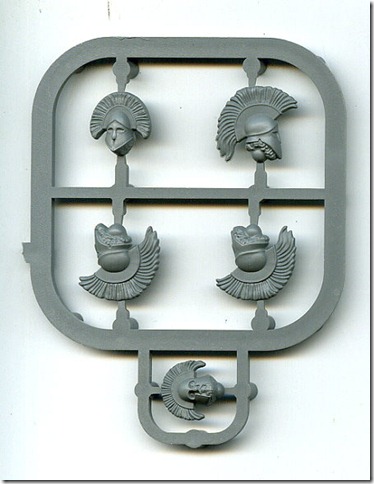 Bodies, one of the bodies has the bronze muscled corselet 12 in the box and another 18 in the linen linothorax armour. All have greaves, so these are for the heavy armoured hoplite figures. 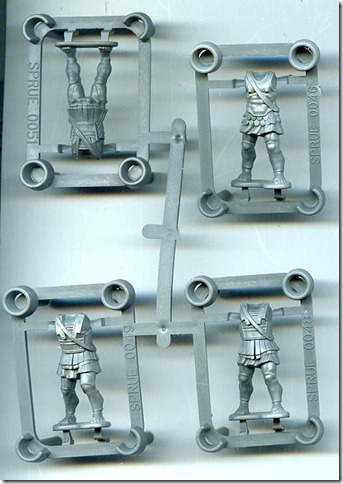 Arms, 5 sets of these and 7 pairs of arms per sprue, so enough for 35 figures. 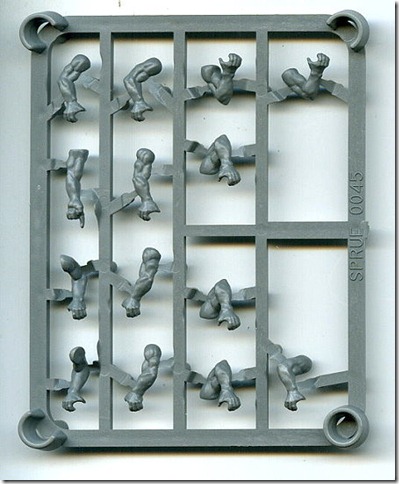 Weapons, 10 sprues of spears and swords. The sword (kopis) is supplied drawn, for gluing into the hand and sheathed to be mounted on the body. My preference is for the hoplite to be armed with a spear and for the sword to be sheathed. Fantastic looking spears. 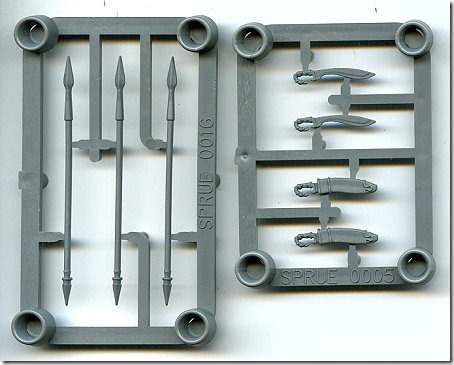 Shields, 10 sprues of 3, just enough for the 30 figures in a box. The shield is a total of 16mm in diameter, with the central area very slightly curved (easy to stick transfers to) and 13mm in diameter. 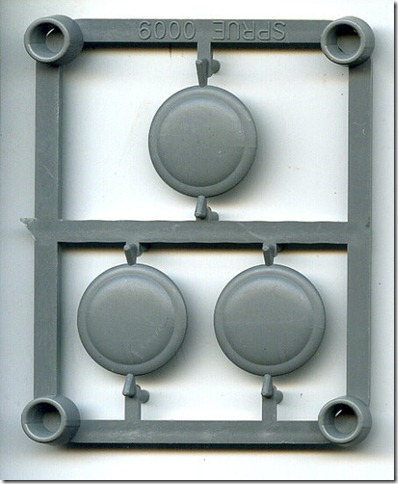 Included with the figures is a new item for WF, plastic bases. 30 of the 20x20mm bases are included in the box. 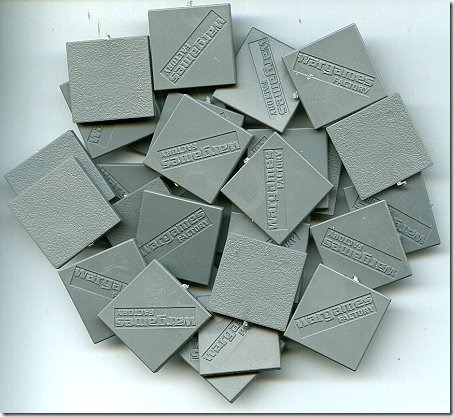 OK so now the next task is to build some of the figures.
Posted by Veni Vidi Vici at 07:46 No comments: