With Warhammer Ancient Battles (WAB) hard to find these days it was nice to see the Phoenix Gaming club running a combined Flames of War and WAB event on Saturday the 20th August. That meant I could go down to Cambridge pick up my mate Steve Riley and head off for a days gaming in Rushden not far away. Steve seems to live in a wargaming desert near Cambridge, so if you know of any gaming going on round there please let me know and I will pass on the details to Steve. As it turned out I ended up being the sponsor for the event, so took down prizes as well as stuff to sell.
I decided to take Carthaginians the first chance to use the new Carthaginian spearmen I had worked on earlier – you should be able to spot them in the photos.
We were using 1500 point armies to give fast games and my army consisted of
General and Army Standard bearer, both mounted
20 trained African spearmen
32 Gallic warriors
22 Oscan hoplites – the cutting edge of the army
14 Oscan warriors – light infantry, to be used as a formed unit or as skirmishers depending on the game
12 Gallic cavalry
1 elephant
9 skirmishers with javelins
The day consisted of 3 battles using a scenario pack, shown here for info. So on to the games
First game, with defenders in the middle trying to cross the table with the attackers closing in from both sides. I was up against Imperial Romans 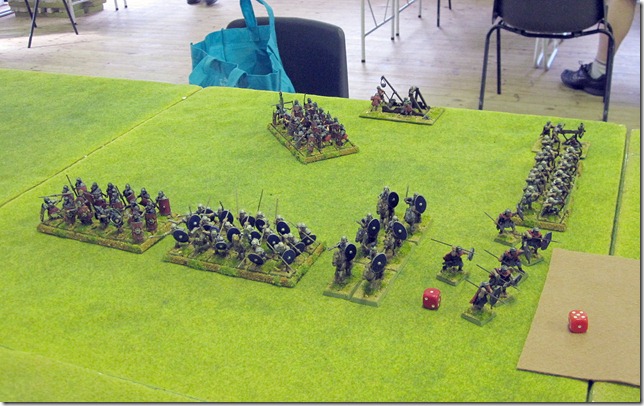 the brown felt represented an area of difficult ground. My opponents deployment was 2 units of legionaries on the left of the picture with mainly missile troops on the right. The cavalry played no part in the battle and marched off (to gain victory points) as soon as they could. 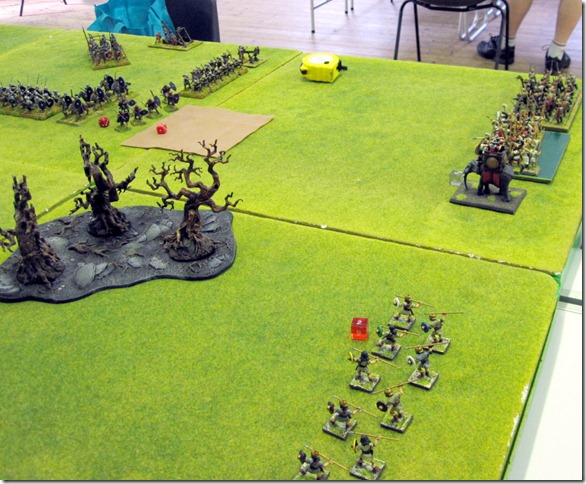 on the right I deployed my skirmishers, elephant, hoplites and Gallic warband. The idea was to advance quickly to prevent the Romans from marching off the table (to victory). The Gauls were my fast attack force to be supported by the hoplites if serious fighting was involved. 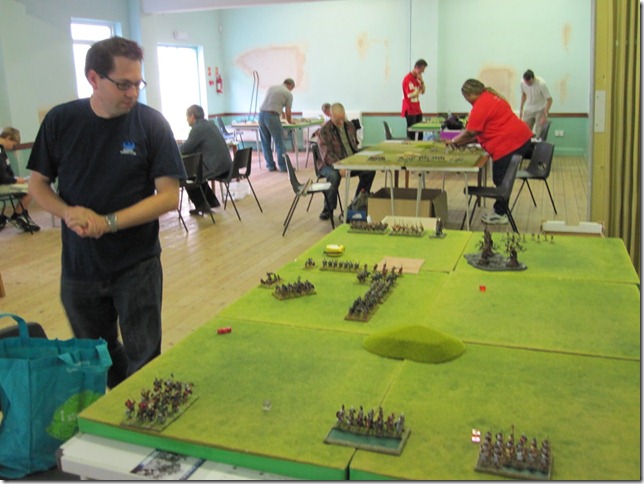 and here you can see the whole table with my cavalry, Oscan warriors and African spearmen ready to roll in from the other side.
The Gallic cavalry hit the Roman artillery from behind and destroyed them, the Gallic infantry took heavy losses from artillery and bow fire as they advanced but charged and over-ran the Roman archers. But I was unable to break the legionaries and the game ended as a draw. Lesson learned from this game, warband cavalry are too unmanoeuvrable, so don’t use them in your army. Cavalry are there to exploit enemy flanks and rear and these guys failed to do it (the rule, warband only move at half speed unless they go directly ahead unless charging).

A look around at some of the other games going on 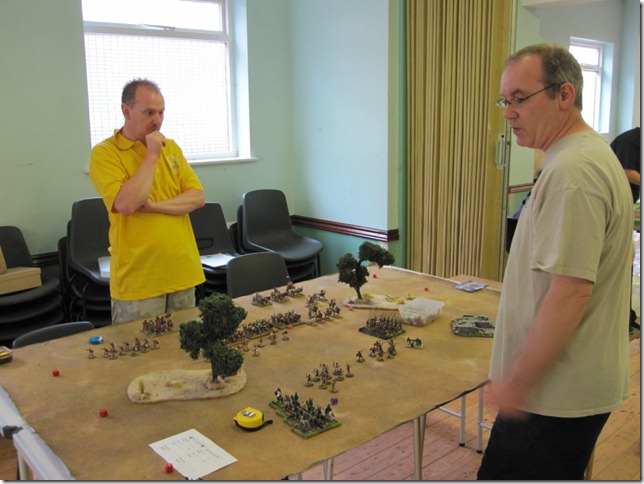 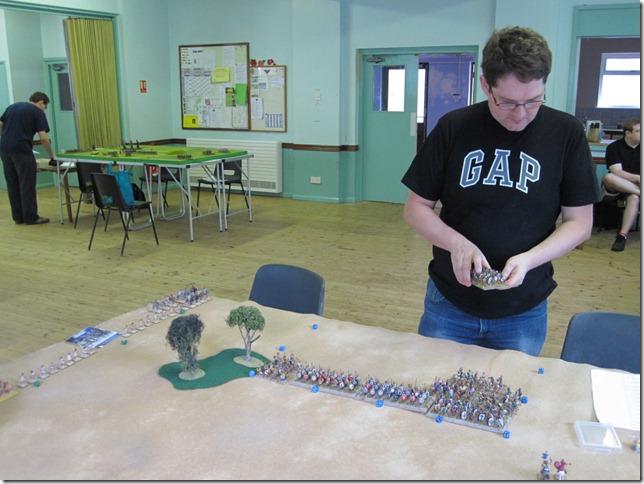 Paul Scrivens-Smith the eventual WAB winner with another Carthaginian army 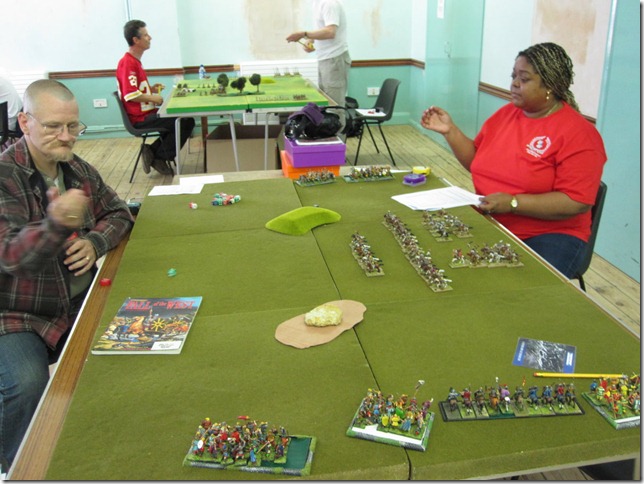 my friend Steve (on left) with his Franks, against an all cavalry Scythian army. The Scythians got first turn and simply rode off the table and to victory. Silly scenario! 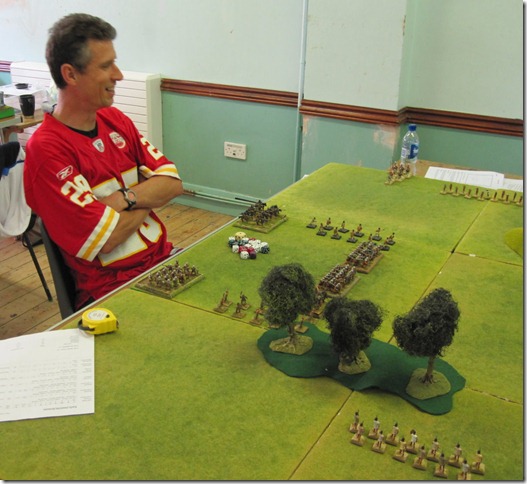 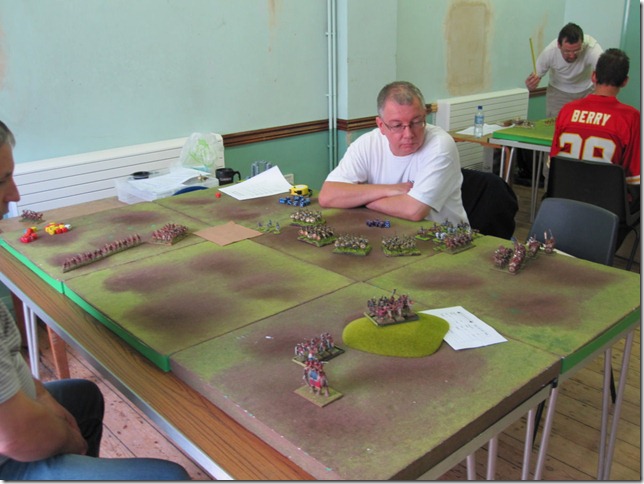 this chap has obviously decided to stand his ground, form a semi-circle and fight it out.
Second game, a head to head battle up against a late Persian army 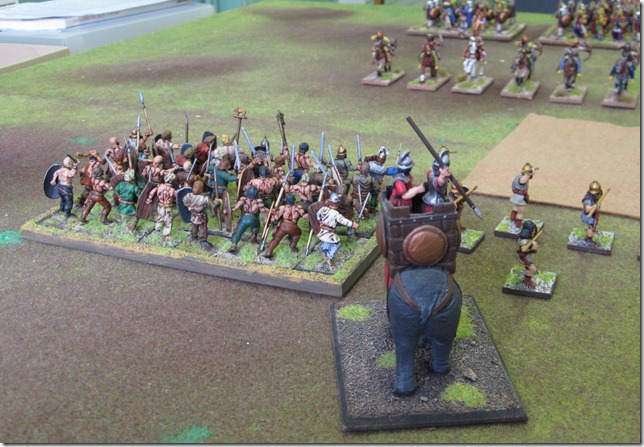 close up on my Gallic infantry 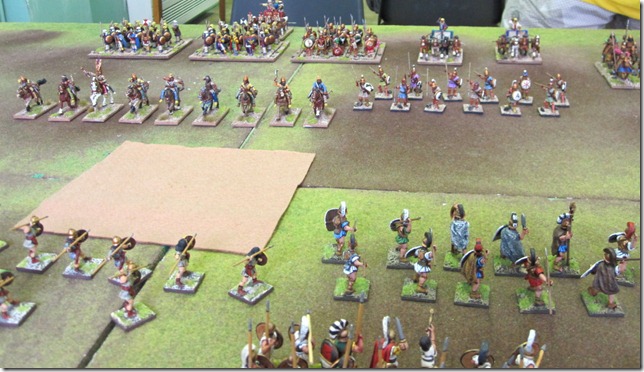 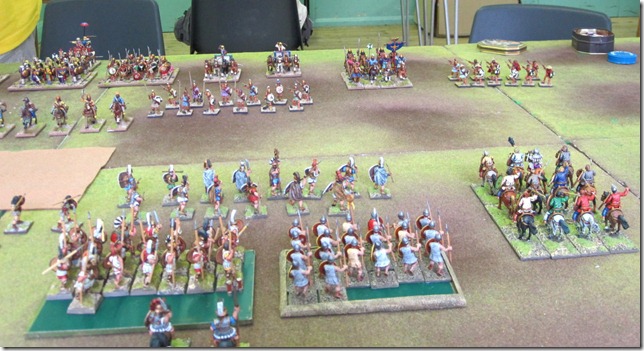 The game was a fairly simple affair, both sides advanced. I cleared the enemy skirmishers out of the way but was then charged by the Persians. It came down to a combat grind with in the end the better armour and fighting skill of the Carthaginians winning the day. A massive victory for me.
Sorry no pictures of the last game – it was too hectic – Paul and I fought in the floor of a valley, the battle swayed backward and forward, I thought I had him but like in the previous game, his troops were better than mine. Both units of Gauls charged in when they should not have (failed the test for warband charging nearest enemy), the elephants crew were all shot dead and it stampeded back into my own army. A dismal defeat was my fate.
But a great day out, well organised by the Phoenix club who are a great bunch of gamers. Paul got first prize for the WAB side of the event and since he did not want to take two prizes I won the goblet of blood for the most troops killed (I think that includes your own!) on the day.
Posted by Veni Vidi Vici at 11:07 No comments:

I have tried to come up with a simple yet realistic way to handle visibility in my WW2 rules in development. As players we can of course see the entire table but in battle it is often difficult even work out where the shots being fired at you are coming from.
The system
Two types of target; infantry and infantry support weapons, everything else.
Basic visibility distance; 1000m for infantry/infantry support weapons, 3000m otherwise.
Now this is modified by a series of situations that halve the spotting distance and these situations are cumulative:
Target neither moved or fired last turn
Target in or behind cover (a wood, hedge or building for example)
Target entrenched
Conditions of poor visibility like; heavy rain, snow, mist or night
Observer is a tank within 1000m of enemy – this is the situation when a tank crew ‘button up’, when they come under fire
So as examples; a tank driving across a field in the open could be seen at 3000m, the same tank behind a hedge and whilst snow is falling could be seen at 750m
Once a target has been spotted then it can be ‘seen’ by all the units in the opposing army and continues to be spotted, unless or until line of sight to it is physically blocked (something like a hill or building in the way would do the trick). Of course you cannot actually see through blocking terrain (see hill/building).
Now Recon units role is to detect the enemy, when they are performing a spotting action, they double the visibility distance, so for example could see a tank moving, at 6000m!
Seems a simple system that gives a bonus for being the defender and entrenched.
Posted by Veni Vidi Vici at 16:14 No comments:

Email ThisBlogThis!Share to TwitterShare to FacebookShare to Pinterest
Labels: WW2

Went out to the Sapporo Japanese restaurant in Manchester and decided to walk the meal off in the next door Manchester Museum of Science & Industry and very interesting it was too. However we were surprised to find an A7V German tank just outside the Power Hall and in very good condition. It is of course a replica but very impressive.
Some details about the A7V here
http://www.militaryfactory.com/armor/detail.asp?armor_id=279 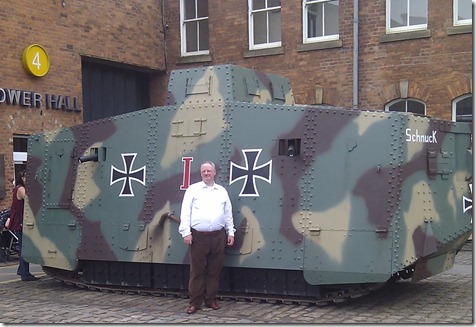 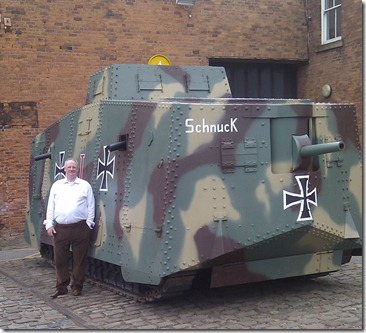 OK nothing to do with wargaming but I thought I would share.
I noticed that change was falling out of my pocket and sure enough it had a hole in it, Since my sewing skills are almost non-existent, I looked online for a repair service. For £7.99 Quickstitch put a reinforcement on the bottom of my pocket and got the jeans back to me in 3 days (the return postage is included in the price). Saved me money and effort, full marks and recommended.
URL
http://www.quickstitch.co.uk/
Posted by Veni Vidi Vici at 18:49 1 comment: