Last year as I sat watching Christmas TV I resolved to finish off painting those half-painted figures I had laying around.
Well today sees the first of those units, if not finished certainly in a condition to be used.
Conquest Games plastic Norman knights, have had these part painted for over a year.
Sample unit

So the bases need doing, some of those plastic spears straightening (dunk in cup of boiling water, take out, straighten and then dunk in cup of ice cold water) and maybe extra detail on the horses.
Posted by Veni Vidi Vici at 17:13 No comments:

This is a game we played last Thursday night to try and see how an early war game of Blitzkrieg Commander would work. With a view to running a club campaign later this year. The scenario was a Deliberate Attack (p38 BKC) with the Russians having 3000 points split into 2 battle-groups and the Germans with 4500 points split into 3 battle-groups (one of those Jims Fallschirmjaeger with which I was destined to become well acquainted). The aim was for the Germans to capture the monastery within 12 turns, well they did it in 5! View of the Russian positions with the monastery the building on the left with the tall tower.

View of the Russian centre, with infantry (entrenched) out in front of AT guns and machine-guns.

On the Russian left, a reserve of tanks. Some T34s, KV-1s, a couple of T26's and 3 BT-7s. As much as possible, the idea was to limit the good tanks that the Russians could have and instead give them the light tanks which made up the Russian forces of the period. Models are 15mm and quite a lot of them are the Zvezda plastic snap-together kits.

The monastery, held by a large force of infantry, a machine gun in the tower and a tank reserve to the rear.

The German forces in the centre

Overall view of the table.

The Germans start the game off with Stuka attacks on the monastery. Russian AA fire damages the Stuka but the attack goes through.

The results of the attack, the red dice represent the damage (infantry can take 6 hits before being destroyed), the purple markers represent units which are suppressed. The defenders have been severely damaged and that was only the start of it. Eventually all the Stukas (the Germans had 3 in play) were shot down but they successfully disrupted the Russian defenders making it easier for the German ground forces to advance.

The German Fallschirmjaeger enter the table from the Russian right, steaming over the Russian infantry entrenched in the wood. It was at this point the Russian tank reserve should have moved to the right to eliminate the advancing paratroopers, however they fluffed their command rolls twice and the Soviet tanks remained where they were.

In the centre, the German advance is also successful. Coming down the road and forcing their way through the hedges. The Russian infantry fall back in front of them, trying to keep covering the road and delaying the Germans. The Russian machine guns move out into the road setting up a zone of fire, to try and keep the paratroopers away from the monastery.

On the right the Russian tanks get a move order and try a counter-attack, it is a dismal failure and the hedge is lined by burning BT-7s.

And its the same on the left, the German advance seems unstoppable.

The view down the road, as the Germans advance.

The Germans sweeping forward in the centre.

The Fallschirmjaeger advance toward the monastery, using the hedge as cover and supported by panzers.

Game over, the defenders break and it only took 5 turns.

Conclusions, well it all seemed totally believable. The Stukas provided flexible fire-power to aid their advance. It was not that effective but it did break up the Russian carefully laid out defences. This was the first game of BKC that I have been involved with that infantry really were important. The infantry combat was fast and brutal, units dying really fast. We even had a close-assault. The Russian BT-7s were almost useless, practically no armour save, easy to kill and with awful fire-power. The table was littered with burning Russian tanks, just like in the real war.
Posted by Veni Vidi Vici at 07:54 2 comments:

I had an idea for making a set of dice for SAGA that could be used for any of the factions as needed. Started off by buying a set of 10 blank dice from the Dice Shop, cost me £3.79 including postage. 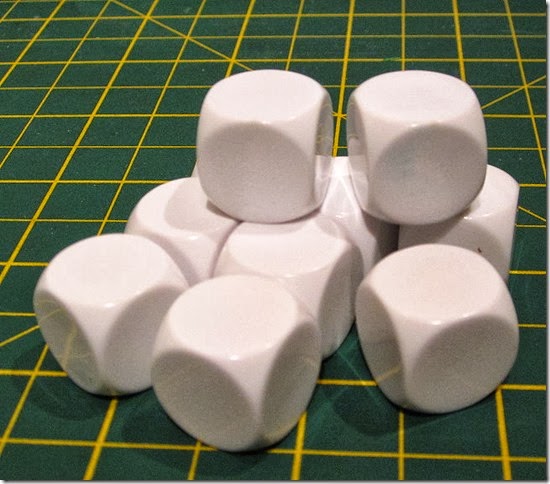 Then I painted the faces. I used paint rather than sticking designs on, as I wanted to avoid unbalancing the dice as much as possible. After painting I also varnished them to try and stop the paint from wearing off. All the factions in SAGA use the same 3-2-1 ratio for their runes. So I painted 3 faces green, 2 red and one yellow. So by substituting a colour for the appropriate rune, you can use these dice for any of the factions. 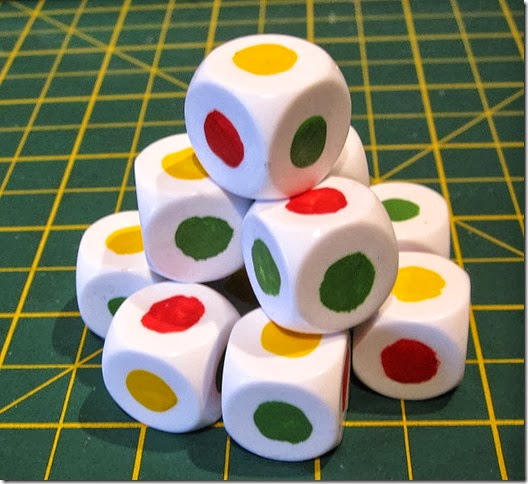