The Die is Cast in the final stages

The latest is the design of the front cover. Fairly simple with some text and a big picture of a Roman centurion.

The figure is from Wargames Factory and the painting by James Roach of the Olicana painting service. 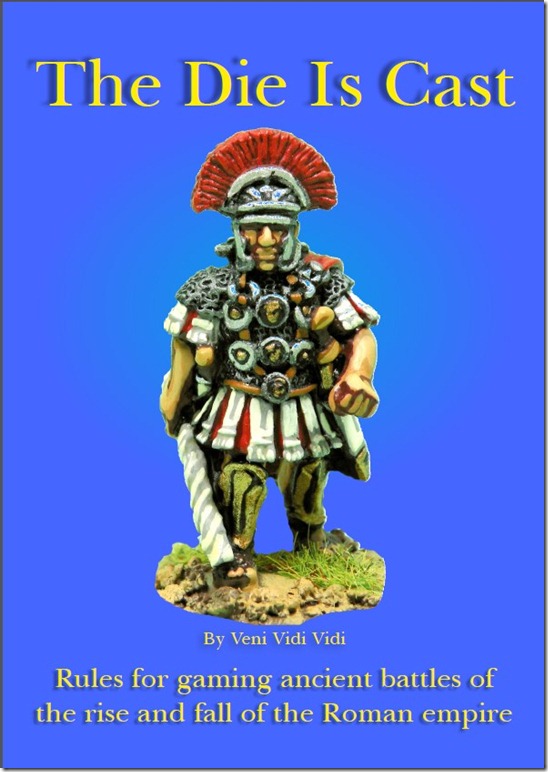 The rules are now published and available from the Veni Vidi Vici website,

Price £14.50 each including postage world wide.

The Die is Cast features;

Simultaneous play with both players moving, shooting and fighting at the same time.
Rules can be used with any scale of figures or basing system.
Combat system uses D12's, with one roll needed to work out the casualties. No; to hit, to wound, to save needed.
Commanders of different levels of ability.
Three different styles of melee; infantry vs infantry, cavalry vs cavalry, cavalry vs infantry.
Try before you buy, the complete rules are available as a pdf.
Handy A5 sized rule book.

An introduction to Warmaster Ancients at Worthy gaming

Some of my friends and I have been playing Warmaster Ancients (WMA) at the Worthy Games shop for the last few weeks. And it was suggested that we organise a mini-event at the shop to bring together WMA gamers from the area, so they can meet up and generally get to know one another.

Now it has become clear that there were a couple of people at Worthy Gaming already collecting WMA armies and there has been a lot of interest shown in our small scale armies and I would like to give everyone an opportunity to join in if they feel like it.

First of all the figures, they are tiny. No reason not to play with big figures of course but the WMA rules were designed to be played with 10mm figures but a lot of us play with 6mm instead (but still use the same sized bases).

Now there is a chap down in Bolton called Jason who has spent a lot of time promoting small scale figures and I can think of no better place to link to to show you how these figures paint up, so Jasons Grand Scale wargaming blog is here

obviously a man who has got the painting side sorted.

So what can I tell you about the game, firstly it is from GW, written by Rick Priestley. An adaptation of the GW fantasy game Warmaster (epic scale WHFB). Units are made of 3 bases per unit and each base takes 3 wounds before it dies. One of the things in WMA is if you do not get enough wounds to kill a base, the wounds are removed at the end of the turn. Only enough wounds to actually kill bases matter. Each base has a number of attack dice and might have a saving roll. Each unit rolls its dice to hit, 4+ is normally what is needed (good troops just throw more dice) and then the enemy gets an armour save (if they have one) against any wounds that they have suffered. Tactics are simple, either put your really good troops against the enemy and smash your way through, or hit the enemy in the flank or rear which makes it much harder for them to fight back.

Now what makes WMA different is the way you move your troops, units (or groups 0f units) can move up to 3 times in move. With a cavalry move of 30cm, that means cavalry could move 90cm a move! But what stops the freedom of movement is that each move must be ordered by a commander. Each army can have a number of commanders, a general and some lesser commanders, depending on their leadership ratings the quality of commanders varies. Each time you want to make a move one of the commanders has to order it; if he succeeds the unit moves and the commander can issue another order, if he fails the unit does not move and the commander has to stop giving orders. Eventually all the commanders will stop giving orders to move and the movement for that army is over. The trick is to get the units of your army where you want them to be. It is not uncommon for armies to just sit there with no leaders succeeding in getting anything to move, very frustrating.

Cost of a 6mm army? well about £40. Painting is different than for normal figures and I am happy to pass on some tips. Personally I put the figures on to tongue depressors and paint them on those, then when they are finished I mount them onto bases.

The rules and army lists are no longer sold by GW but there are copies out there and I would be happy to let you read my rules and army list books. The armies available, well this is real history we are talking about, so just imagine a real army and there is probably a list for it; Romans, Greeks, Persians, Ancient British, Saxons, Vikings, Normans, Huns............. the options just go on.

So what I propose just for Red Steel members is that we set up a day for an WMA introduction session, you would not even need an army, we have some spare you can use. Get to learn the rules and then you would be ready for an open WMA day at Worthy Gaming where we invite people from the area, to come down for a days gaming.

So thats the plan, just let me know what you think.