Initial setup
A fairly bare battlefield with a dominant hill on the right of the Roman line. Table 6x4 foot at Portcullis games, Bolton. 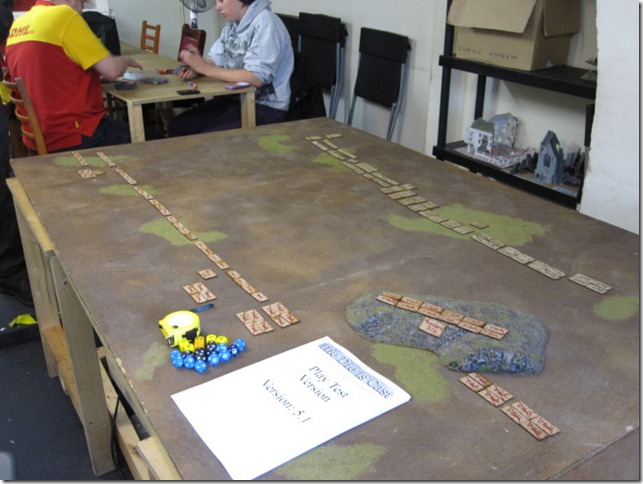 In the picture above the Romans (red marker pen) are nearest us and the Hunnic forces on the far side of the table. Special rules for the game:
Romans were passive so they cannot start moving until an enemy unit comes within their charge reach.
Huns tried to take the hill first so the Hunnic player can only move 1 division of their army until they have contacted a enemy unit on the hill. In this case the Hunnic player decided to use the Gepids to take the hill, in the actual battle the Ostrogoths were given the task (and they failed).
The Hunnic cavalry certainly fought hand to hand and there has been some debate about how to represent them. In this game we are simply going to suspend the normal rule that light troops cannot charge other troops frontally and make the Hun cavalry rather good, with high morale and combat weapons as well as their bows.
Once the Romans have broken an enemy unit, then the entire Roman army can start to move freely. 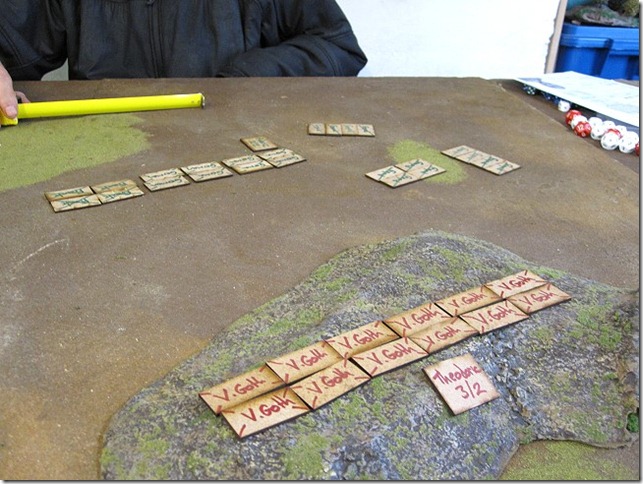 Move 2. Showing the hill lined with Visigoth infantry in shieldwall and their leader (Thedoric a 3/2 general). 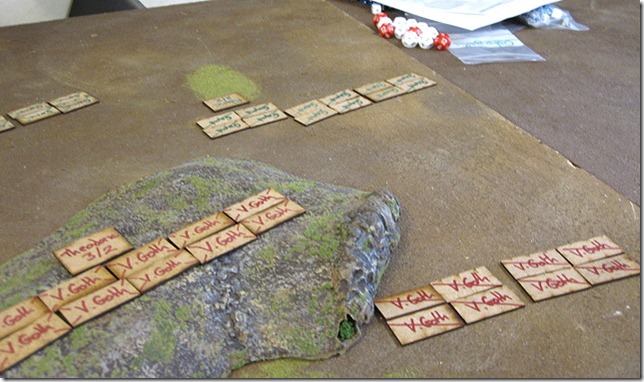 Move 3. Gepid cavalry moving round the hill toward the Visigoth cavalry, who are there to prevent the enemy getting round the infantry flank. 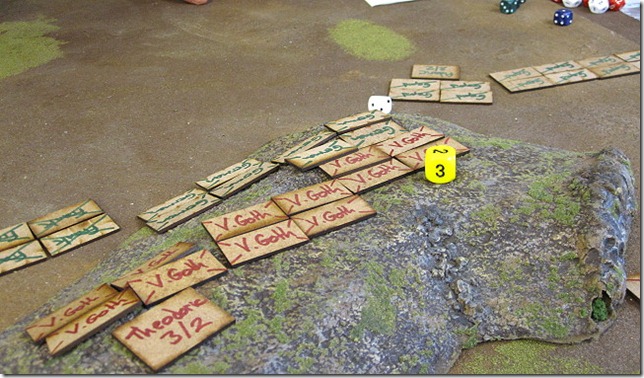 Move 5. On the hill one of the Hunnic units of German infantry attempted to charge but instead became Shaken and so the Visigoths decided to take advantage and launch their own attack, downhill. The combat went to the Visigoths (Roman) and the Germans were forced to Retreat. 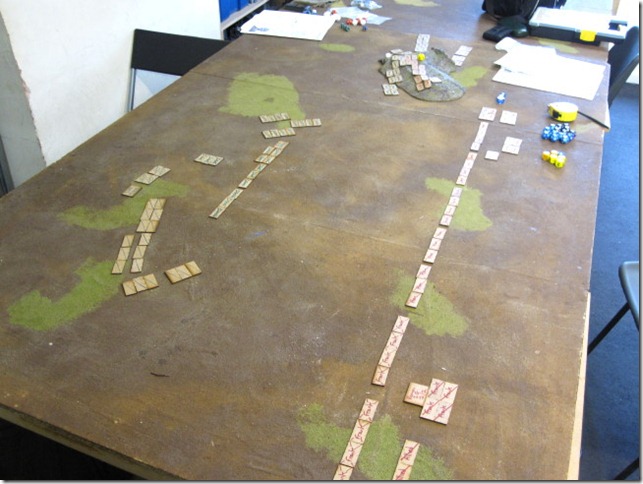 Move 5. Overall view, with the Hunnic forces in contact with the defenders on the hill, the rest of the Hun army is free to move. 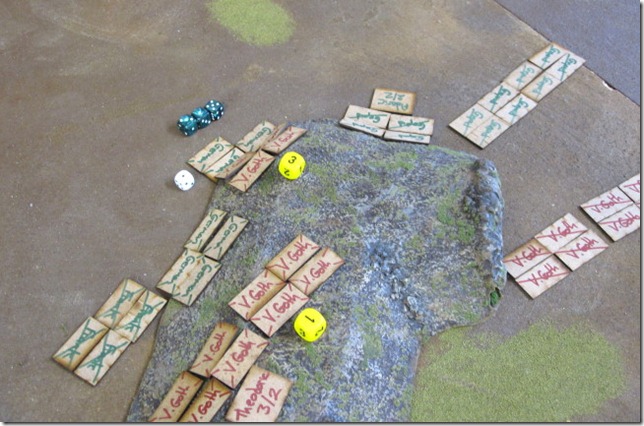 Start of move 6. The Germans have retreated, followed up by the Visigoths but that exposes the Visigoth rear to a charge by the Gepid cavalry. In an attempt to put the Gepids under pressure the Visigoth cavalry now declares charges on the right. 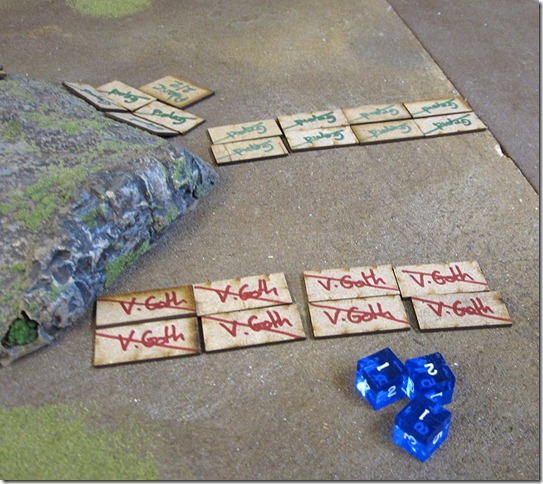 With a miserable pre-charge morale roll of 4, one of the Visigoth cavalry units instead Retreats in the face of the enemy. One of the principles of the Die is Cast is the morale roll, you can do anything you like with your troops so long as they are under your control. Fail a morale roll (as above) and all of a sudden, they are doing what they want to do. Morale rolls are taken; when attempting to charge, receiving a charge, taking casualties from shooting and when losing a round of melee, for example. In other sets of rules a command and control roll is used instead.
The above situation now leaves the Visigothic infantry on the hill to its fate and a lone unit of Visigothic cavalry to fight against two units of charging Gepid cavalry (who with lances have a slight edge in combat anyway). 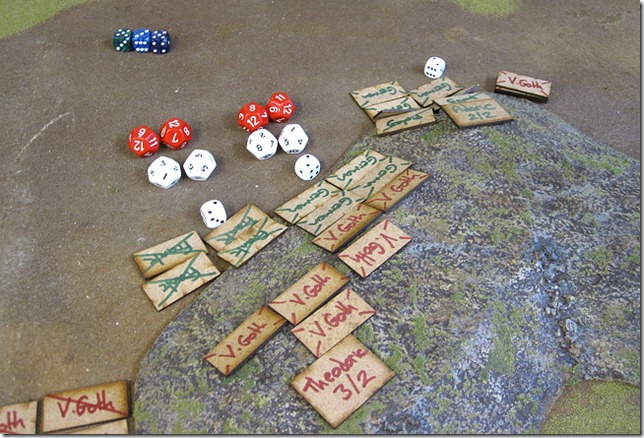 End of move 6 combat. The Visigoths lose on the hill. The unit on the far right, sandwiched between the German infantry and the Gepid cavalry is literally annihilated and taken off the board (little pile of counters on the end of the hill). In the centre the Visigoths break and flee and on the left the Visigoths are defeated but led by their general are merely forced to retreat. The Hunnic player tried to stop the Frank infantry from pursuing the retreating Visigoths but failed the morale throw and had to make the pursuit move, exposing their flank to the Visigoth cavalry on the far left of the picture. 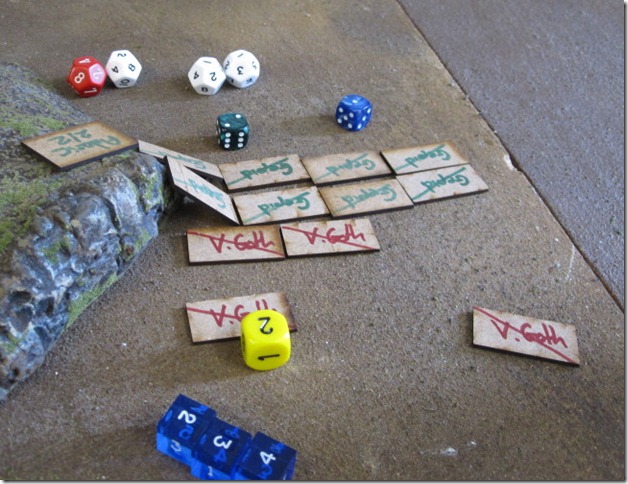 End of turn 7 combat. The Visigoth cavalry have lost a full base and have taken 2 wounds (yellow die) on another base. They are forced to recoil under the pressure of two enemy units attacking them (they will fight with 4 dice against 6 enemy

Technorati Tags: Die is Cast,Roman,Hun,Chalons,battle report
dice).
Thats all we had time for in this gaming session, in total it took about 1 and a half hours to play through and was a lot of fun for both sides. With a full day to game (perhaps 3-4 hours) two players could fight this through to a conclusion I am sure.

26th of September we tried it again, this time with the Ostrogoths attacking the hill. As per the original game the  first action was the Hun player trying to swing round between the hill and the edge of the table. Both cavalry forces (Visigoths and Ostrogoths) threw their javelins, resulting in one unit of Visigoth cavalry Retreating (just as in the first game) and a unit of Ostrogoth cavalry Routing. Continued pressure saw the remaining unit of Visigoth cavalry first Shaken then Routing and the following wave of Ostrogoth cavalry attacking the flank of the Visigoth infantry on the hill and breaking them. So that is the way will play the next run of the game, which should involve some painted figures, Ostrogoths attack the hill, defended by Visigoths. The early part of the scenario works, the next game should see a full run through.
Posted by Veni Vidi Vici at 08:44 2 comments:

Another of our small scale games using DBA lists and the Die is Cast rules. The game was played with 15mm figures, mostly Donnington Miniatures.

The Carthaginian army; 2 bases of Spanish cavalry, 2 of Numidian cavalry, an elephant, a base of slingers, 2 bases of Gallic warband, 2 bases of spearmen and 2 bases of peltasts. 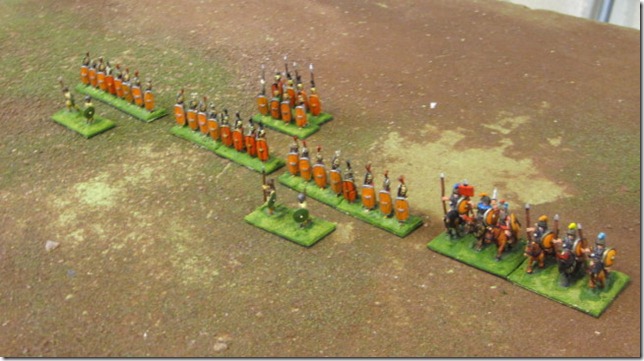 The Republican Roman army (under my command); 3 units each of 2 bases of hastati/princepes, 2 bases of spearmen and 2 of cavalry. I decided to use the 2 bases of velites as separate units to both give me extra flexibility and because I believed that under the rules once these light units had taken any casualties they would fairly much be useless, so best give my opponent two units to target. 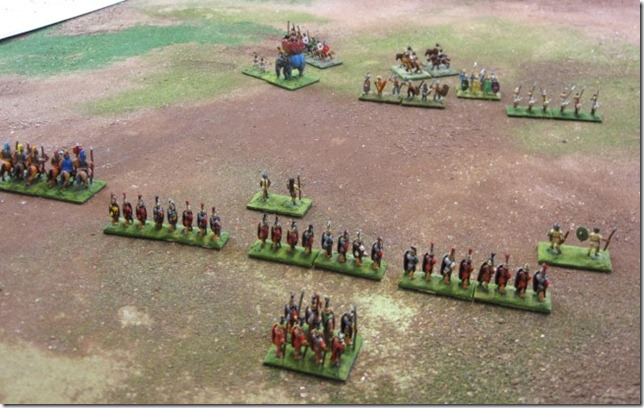 After the first move. All the Carthaginian cavalry move over to the left to face the single unit of Roman cavalry, whilst I push my Roman infantry forward as fast as they will go. 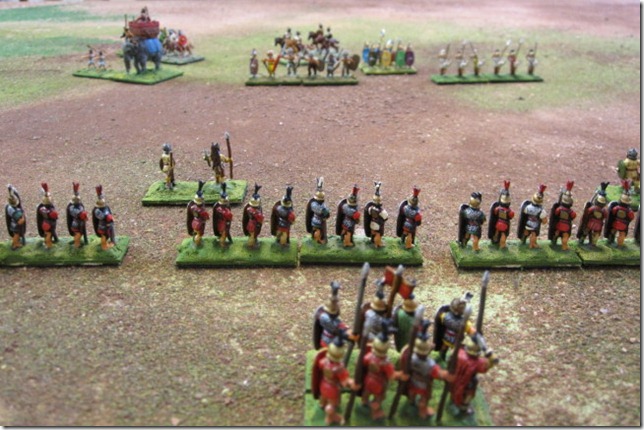 View from behind the Roman front line. 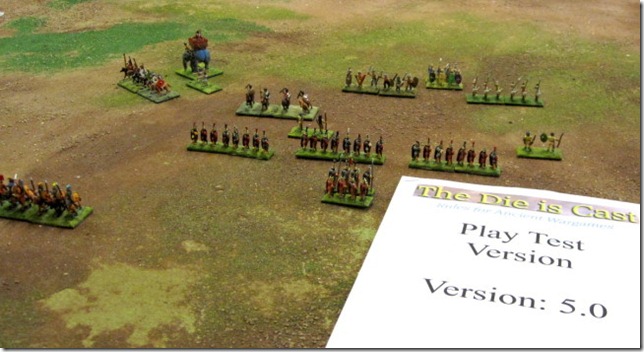 The Roman infantry press forward but the Roman cavalry turns back and moves away from the Carthaginians hoping to delay combat but still remain as a threat to stop the Carthaginian cavalry and elephant from attacking the Roman infantry in the flank. The Numidian cavalry and a unit of velites hurl javelins at one another. With only 1 die per base firing (as they are light troops), all dice hit, the velites are destroyed and the Numidians take a hit. The Numidians fail their morale test and rout, rallying at the end of the turn. 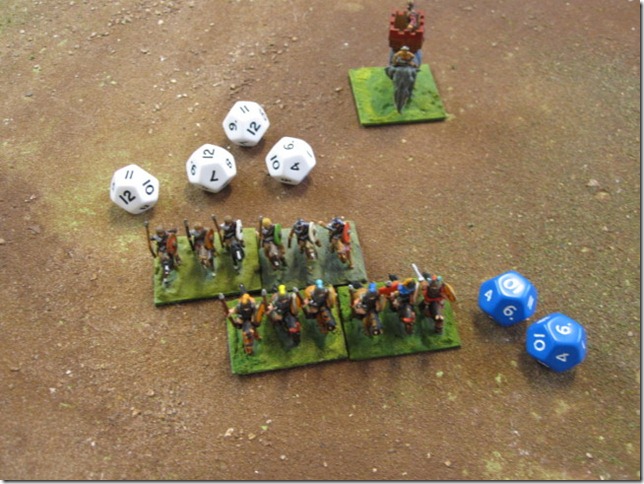 On the left, the Carthaginian (Spanish) cavalry charge, supported by the elephant. Rather than face that lot, the Roman cavalry try to evade and are caught by the cavalry – they outdistance the elephant. Under many rules that would mean that the Roman cavalry would be automatically broken but is not the case in the Die is Cast. The Roman cavalry will fight back but count as shieldless and unformed. With the charge bonus and fighting shieldless enemy, the Spanish cavalry needed 7’s to hit but only scored one hit (see picture above), the Roman cavalry needed 3’s to hit (no charge bonus and they were fighting unformed and with only one die per base, as they were hit in the rear. The Romans scored no hits and lost the melee by one hit. 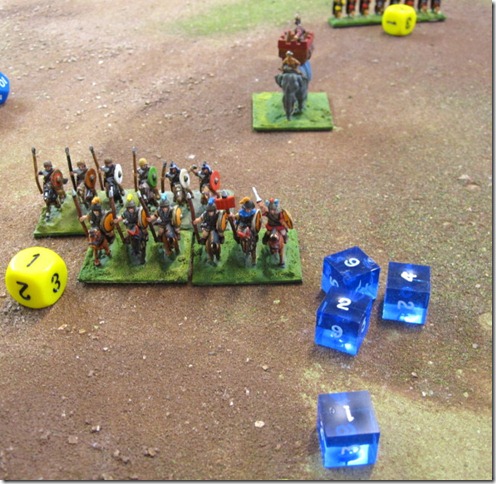 However the Romans roll good morale dice (keep the 6, 4 and 2. Discard the 1) and stay in the melee. But they cannot turn to face the enemy and can take no action (unless it is to run away) when the elephant charges in. 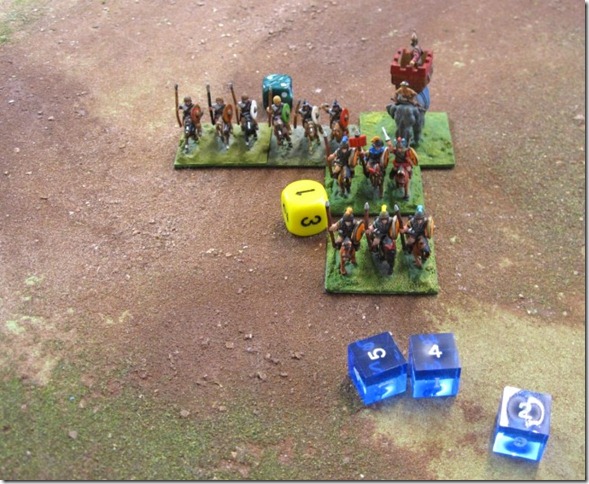 On the next turn the elephant duly charges in, the Roman cavalry pass their morale check and fight on. This time the combined attacks of the Spanish cavalry and elephant inflicts 4 hits on the Romans whilst the Romans get really lucky and to do 2 back on the Spanish (rolling 2 dice and needing 3 or less!). So the Romans lost the melee and are now down to half strength, so they roll 3 dice and discard one of those. As can be seen above, they rolled well, kept the 5 and the 4 and Retreated out of the melee. pursued by both the cavalry and elephant. 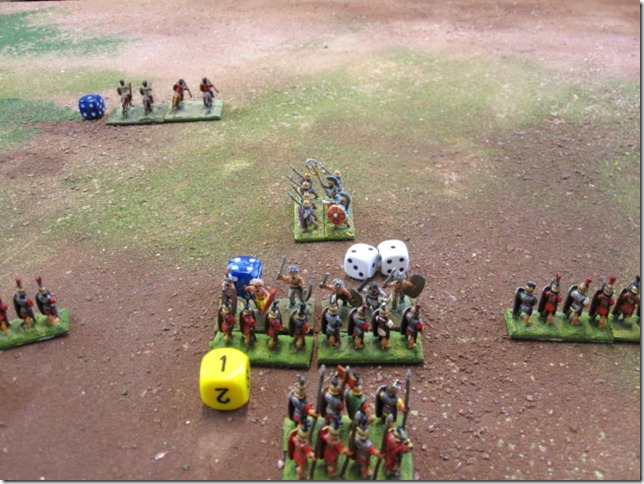 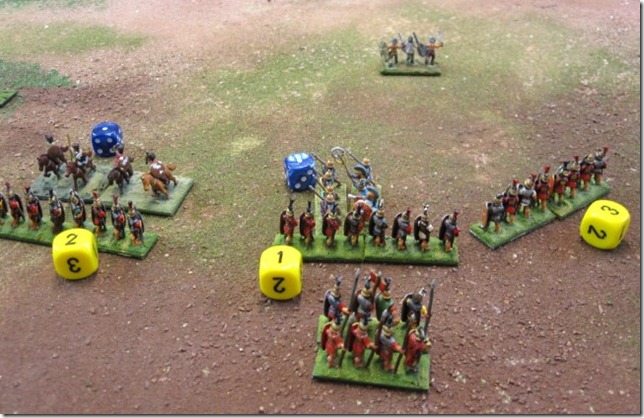 The routing Gauls can be seen in the background, running away. The Carthaginian spearmen have been hit in the flank with another unit of Romans coming up behind them. On the left the Numidian cavalry have returned and are throwing javelins into the Roman infantry, causing another hit (the yellow dice are hits taken throughout the game). 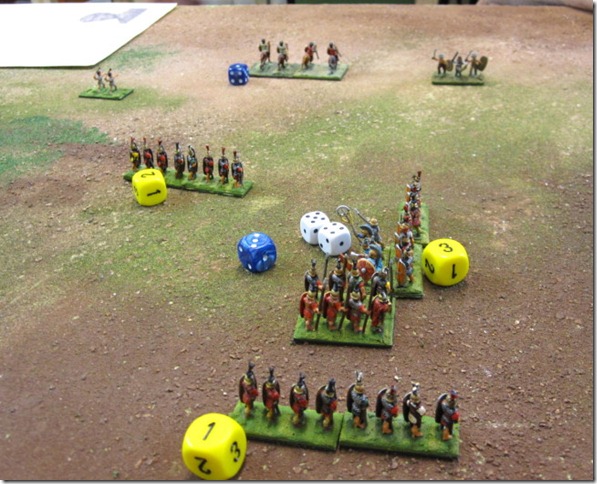 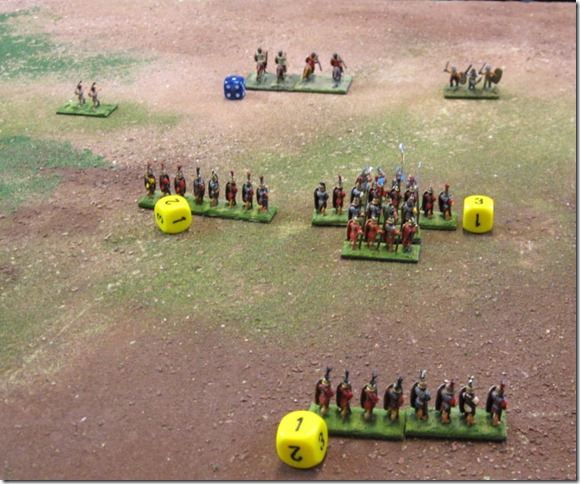 The end in the centre, the Romans have broken through. So even though the Roman cavalry has been destroyed, their sacrifice allowed the Roman infantry to get into combat and do what they do best, fight.
Posted by Veni Vidi Vici at 13:30 2 comments: