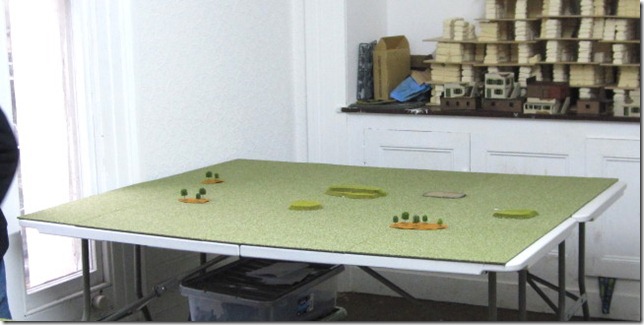 On Saturday 19th January we had the introduction day to prepare local gamers for the Warmaster Ancients to be run on Saturday 23rd February. After the day they should be happily able to play games on their own and give their opponents a decent game.

The tables were covered with carpet tiles in two different styles, green and yellow (for a desert battlefield). All tables 180x150cm.

For the first game it was easier to get all the players involved, so that everyone could learn at the same time. The match-up was Indians vs Parthians (1,000 point armies). 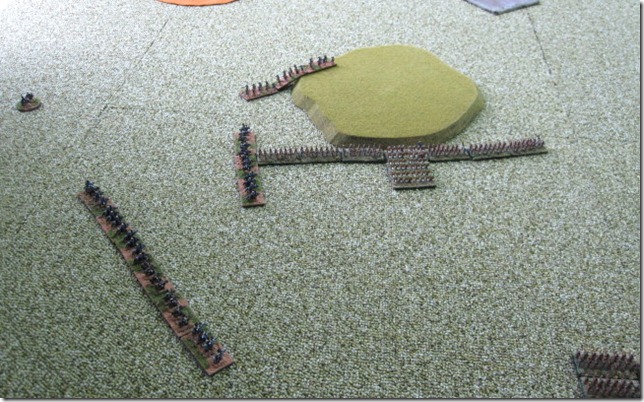 The best way to attack the enemy is in the flank or rear. These Parthian horse archers got the hang of it, quickly on to the flank of these Indian infantry and whittling away at them. Using Initiative moves to get into contact, inflicting some damage (eventually they wiped out two entire Indian infantry units) and then falling back to avoid continued combat. A highly effective tactic. 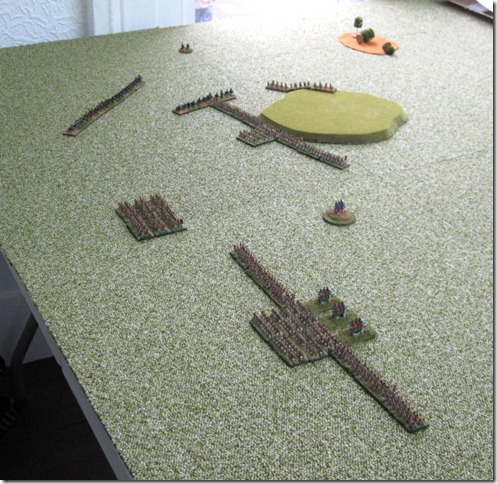 A larger view of the situation. For three moves the Indians failed to move anything in this sector of the table (the elephant on a round base is their commander Porus) and just had to take it on the chin as none of the archers had a target. Once they were able to turn and face the Parthian horse archers it was a different matter however. 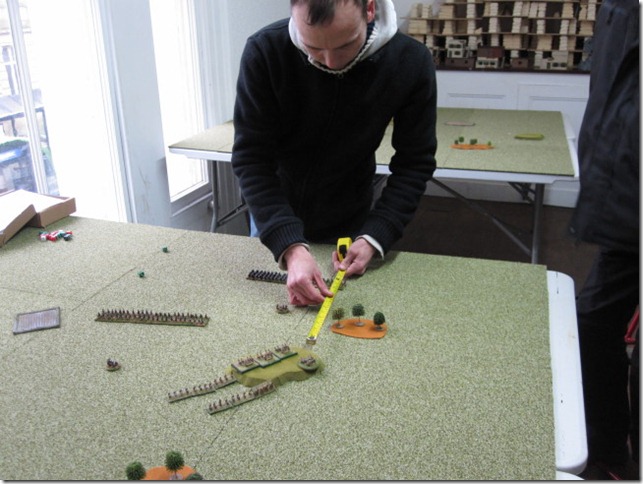 The main force of the Parthian army fights against a singe brigade of the Indian army but it does contain a unit of heavy chariots. This is the offensive part of the Parthian force and had their only two units of heavy troops, cataphracts. 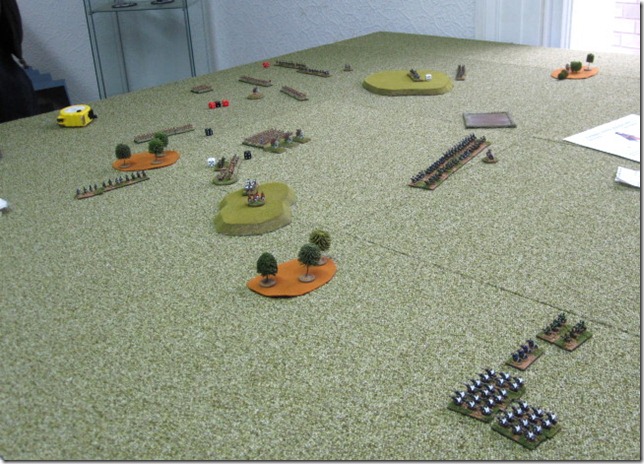 In a frontal attack against the Indians the Parthians were successful but lost almost all their cataphracts, leaving them with very little to attack with. But with wiping out the Indian brigade, the two Indian infantry units on the other side of the table all that was needed to sucure a win was to kill two more Indian units and that was done by shooting two elephants to death with massed bow fire (3 units per elephant).

Using the single elephant rules makes elephants horribly vulnerable and easy pickings if you can attack them right and so the elephants became the downfall of the Indian army.

We took a break for lunch and over the meal discussed what we would like to do to get historical gaming going at Worthy Gaming.

For the next games we split into two games; Late Romans vs Carthaginians and Parthians vs Sassanid Persians. 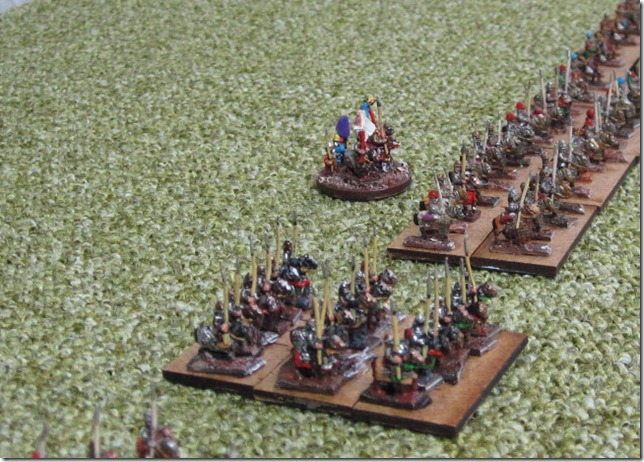 Close up on the Sassanid army. The figures were only finished the night before the event, so basing still to come.

After the first move of the Parthian army. Only one brigade got to move, the others sitting and watching. In fact falling command rolls and having blunders was a feature of this game. 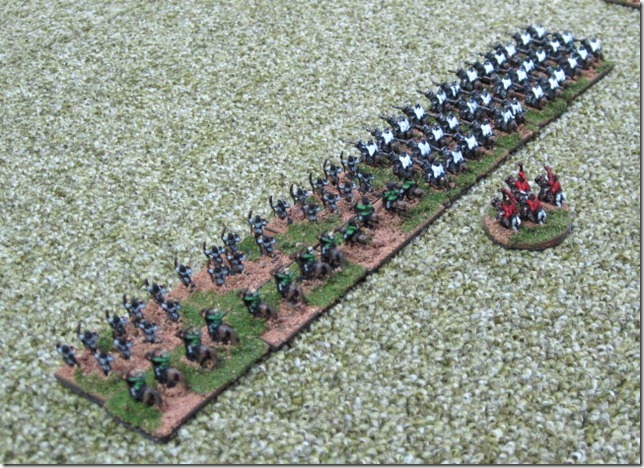 Close-up of the Parthians – 2 units of catapracts, a unit of foot archers and horse archers. 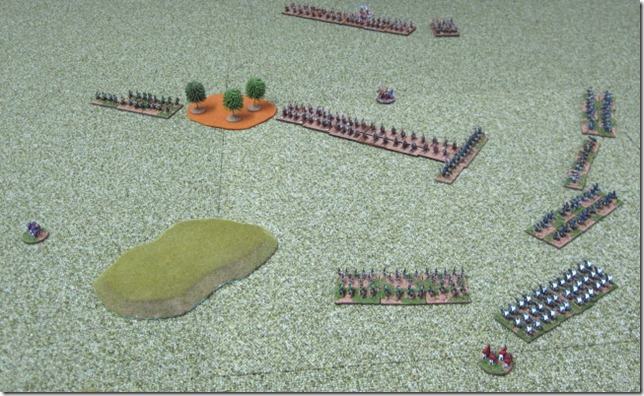 Again the flank attack features as the tactic of the Parthian army.

The Parthian attack certainly broke up the Sassanid brigade but at the cost of two bases of the Parthian horse archers. 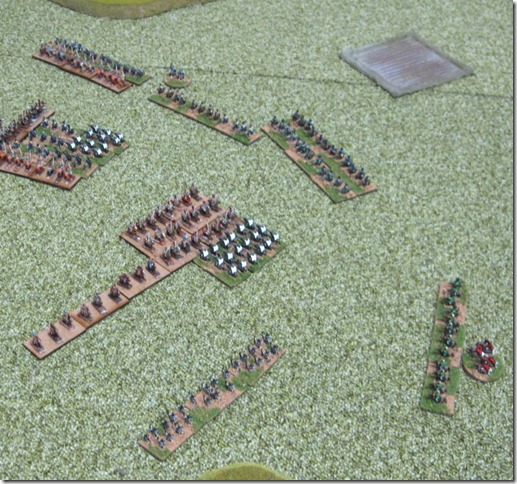 Massed combat in the centre of the table. With more heavy cavalry available the Sassanids tended to win these combats. 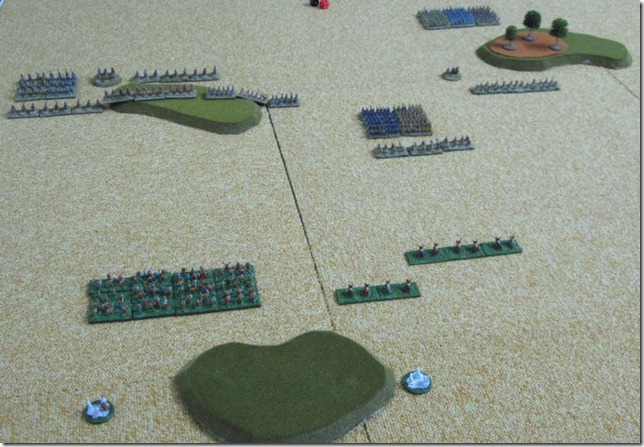 The other game, Carthaginians vs Late Romans. The Romans advancing happily whilst the Carthaginians (foreground) failed to move most of the army, so ended up leading with the Gallic warband and two units of Numudian light cavalry (one unit of which has already lost a base to shooting). 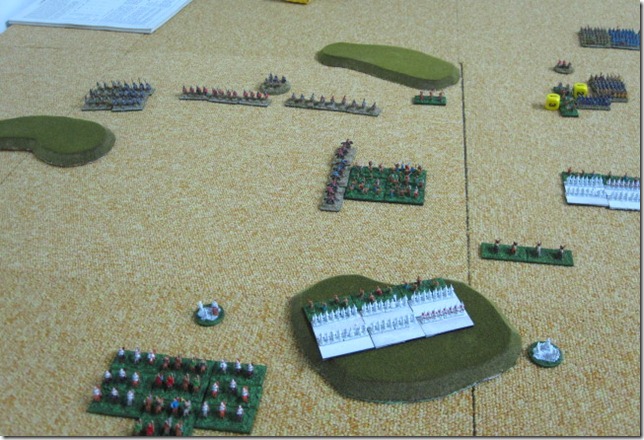 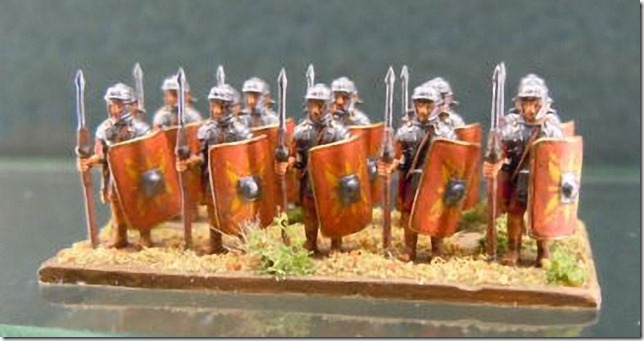 I love the figures and you can see more of them at the chaps test website. I am afraid they are not available to buy yet but I hope to get my hands on some sample figures. 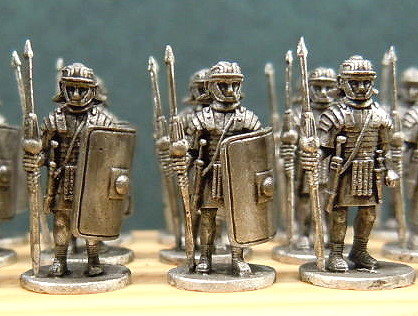 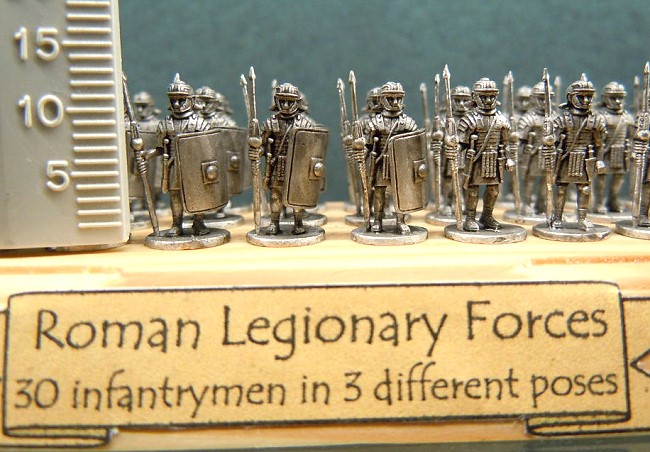 An intro gaming session for those who are unfamiliar with the rules, on the 19th of January and a full days gaming on the 23rd February.

Plan for the Intro Day

Army size 1,000 points if you are bringing your own. Pick armies from either the rule book or Ancient Armies book. Some players are bringing extra armies for those people who do not have an army of their own.

Terrain will be preset on the table so there is no need to set it up. One player should nominate one table edge to the odds, the other edge will be be evens, roll a die and what is rolled is the edge that player will be playing on.

The tables are 180 wide and 150cm deep.  So you can set up your army up to 30cm from your table edge and just for our games not within 20cm of the table sides.

Players should roll a die each, the highest roller chooses to deploy first or second. The player going first will deploy their entire army first but will also take the first turn. The other player deploys second and takes the second turn.

There are no turn limits. To win either; kill the enemy general or destroy half of the enemy core units.

Preparation of the terrain continues with some trees 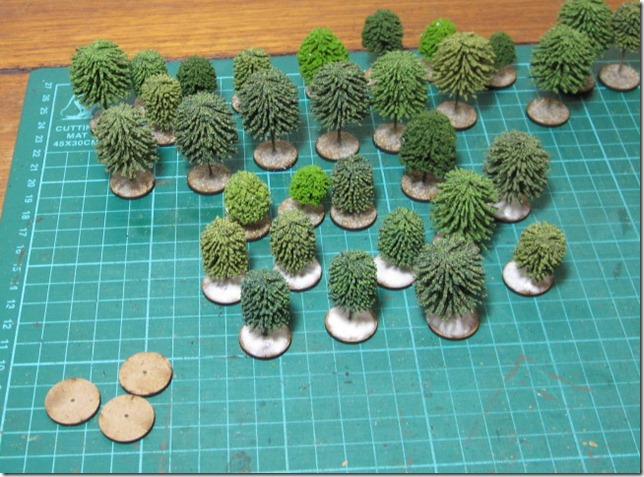 First of all a hole was drilled into the circular bases, the trees stuck into position with a dab of epoxy glue then some flocking gel placed round the base to give them a bit of texture. I will then paint the bases and job done.