Warmaster Ancients – the day of battle

On the day there were six players;

A good win there by Steve but more on that later.

Because of a double booking at Worthy Games, we had to use the small gaming room. That meant that we were limited to one 12 foot by 5 foot table,which I split into three 4 foot gaming tables. I decided to use green carpet tiles (that I had picked up at a discount carpet suppliers in Bolton) as the best surface to play on, despite being heavy to carry. 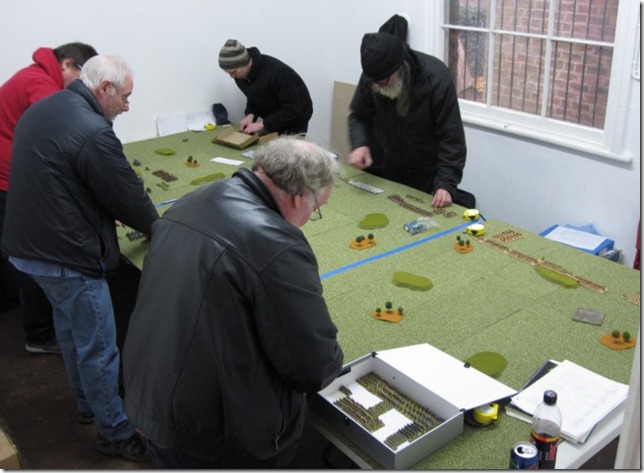 Four foot wide table were a bit cramped and gave the feeling of attacking down the floor of a mountain pass, rather than the open combats I had been hoping for. The limited frontage favoured infantry armies as it was difficult for cavalry armies to get round the enemy flanks.

But we still had some very nicely painted armies turn up. These are Dans Arab Conquest army 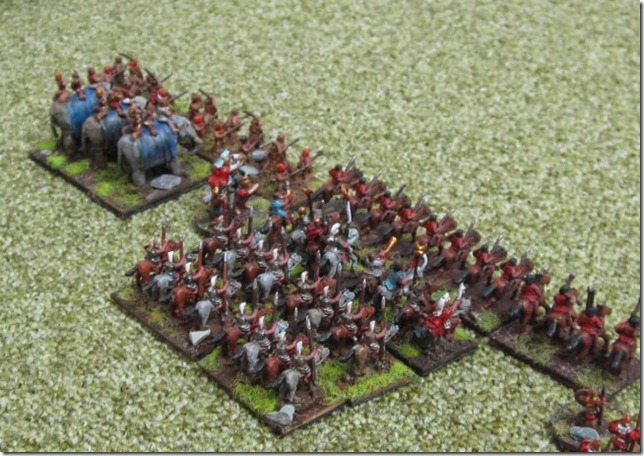 Lees Parthians advancing in the early part of the game. 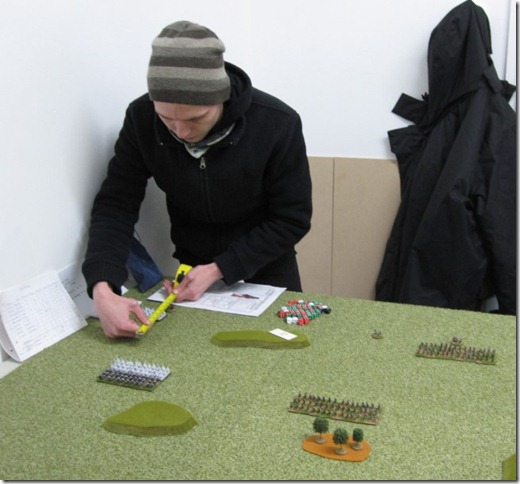 And my own Indian army advancing against Daves Late Roman army. Dave actually uses his own Indian army and so I experimented with a brigade structure that I had always thought would work well for Indians; two units of bows, backed by two units of spearmen, with single elephants in the middle and ends of the brigades. The elephants make the flanks of the brigade harder to attack and so funnel the enemy into fighting the archers and spearmen. Whilst this brigade formation was quite effective, it really lacked the ability to attack anything and with the elephants tied up supporting the infantry, I really felt that the army could have done with some heavy chariots to provide an attacking arm.

The game above (my Indians vs Daves Late Romans) was the most brutal game I played all day. Although my infantry were only really good at defending, my Indian cavalry were unleashed onto Daves archers and managed to obliterate them before attacking the flank of the legions. However the legions quickly smashed my cavalry and then went on to tear the Indian infantry to pieces. Not quite enough to win Dave the game (a win is getting the enemy army to Breakpoint or killing the enemy general) but give him another move and he would have got there.

In the first round of games Dan’s Arab Conquest army shattered Lee’s Parthians giving Dan the only really good win of the round. John’s Sassanids got a slight win against Dave’s Late Romans and my Indians beat Steve’s Carthaginians.

In the second round most of us managed to score zero points, the only exceptions being John’s Sassanids beating Lee’s Parthians and Steve beating the Late Romans.

So we went into the third round with Dan just in the lead closely followed by John but in a upset to the expected outcome, Steves Carthaginians got the only true win of the day (breaking the enemy army) against Lee’s Parthians and stormed ahead. Dan and John fought it out on the top table with Dan just scoring a few hundred points more than John to make Dan a close second behind Steve.

Well basically Dan showed us that we have been playing WMA very wrong but the lessons have been taken on board and we hope to up the game locally. I really doubt that we will get anymore interest from the local gamers in Preston but we can continue to play happilly amongst ourselves.

I think the varibale army size system was OK but next time rather than betting against the other players army bonus, I would just make it 3 cards over 3 games and each time you use a card is it ‘burned’ and cannot be used again. So the player has the choice of which bonus card to play in each of their three games.

Oh and I did not allow enough time for lunch. If I do it again, I will allow an hour.