After the last pay-test we decided to make the game a bit more like history and a bit more like a real game. So this time with equal point army lists and instead of PzIV against the T34s, make it more challenging with PzIIIF’s. 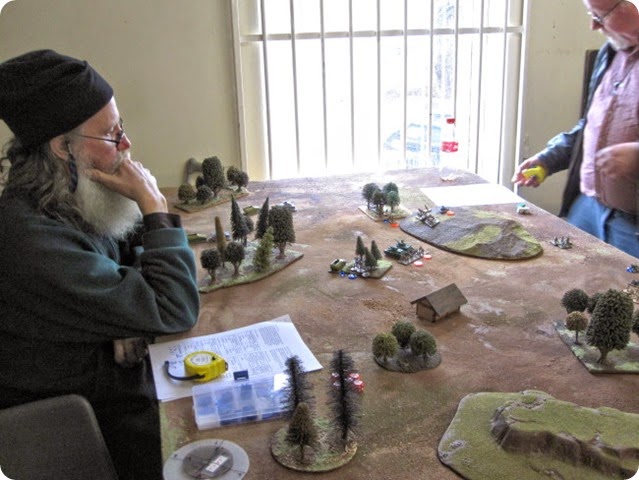 Russian squads organised into larger units on my advice (as author of the rules). Putting two squads and the platoon leader into one unit makes them less flexible but gives them a lot of punch and staying power. 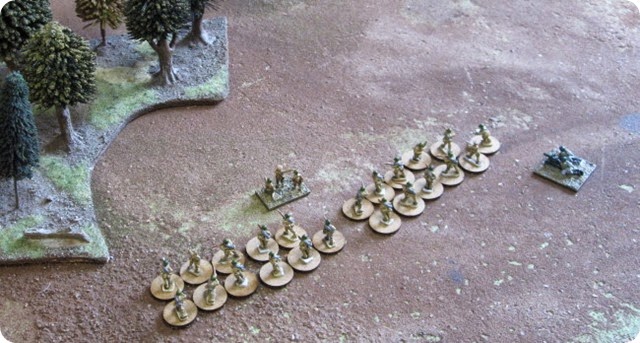 Now after one of the previous play-tests a rule for automatic spotting at distance of 5 was introduced. That means that both sides units are spotted, if either sides unit is moved to within that distance of an enemy unit. As you will see, that became important in this game.

In summary, Action all Fronts is a WW2 one model = one man game, with IGoUGo and alternate unit activations. During an activation a unit (squad or tank usually) can make multiple actions the most important being to move, shoot or spot enemy targets. Nothing can be shot at until it is spotted. And the other thing is that the enemy can attempt an over-watch fire action with one of their units, if one of your spotted units moves or fires.

The Russians boldly advance their two T34s into the centre, covered by infantry on the hill to their right and with their own tank riders on the back of the T34s. 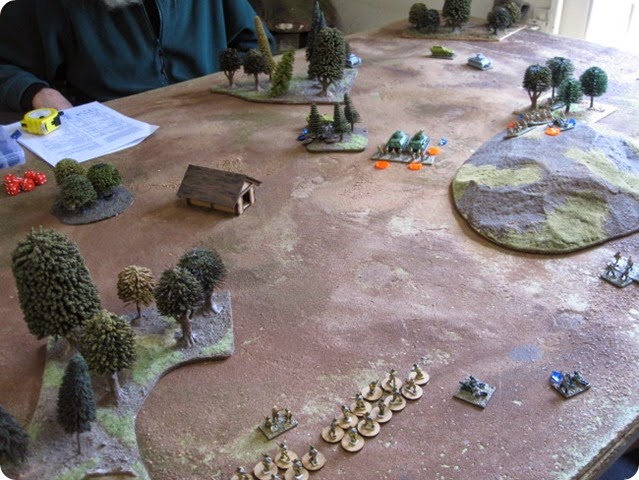 The Germans respond by bringing up a section of Panzer Grenadiers and dismounting in the wood to the left of the T34s. 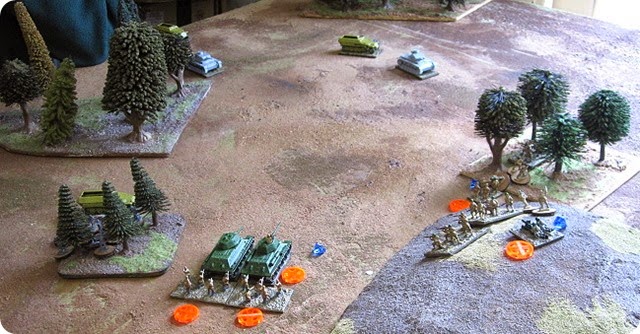 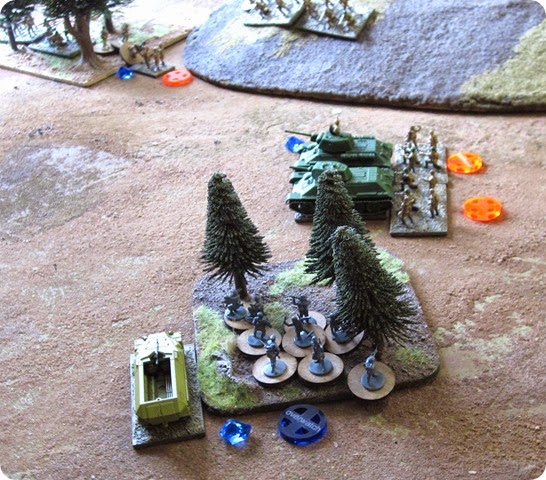 But the Panzer Grenadiers are so close to the Russians that they are automatically spotted (see previously) and the Russian supporting mortars open up on overwatch fire and wipe the dismounted Germans out. The Germans now having spotted the T34’s bring out their own PzIII tanks to engage the T34s. A lucky shot with an HE round from one of the PzIII disables both T34s (as they are very close together and causes major losses on their tank riders. Meanwhile more Russian infantry are brought up to support the attack and the Germans occupy the woods in front of the Russians. 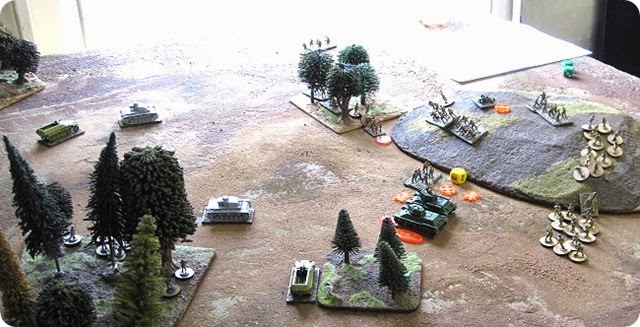 The German player then attempts to get behind one of the T34s and finish it off with a shot on the rear armour but fails and instead becomes vulnerable to the Russian infantry, who first advance and then charge the isolated PzIII. 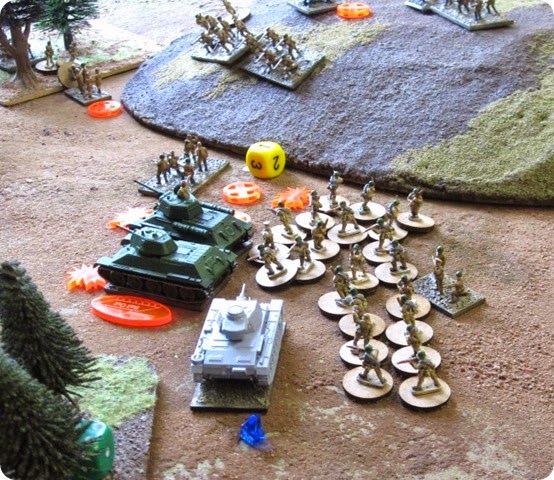 As they advance the PzIII uses overwatch fire to shoot at the Russian infantry, both with HE from its 50mm gun and with its machine guns. The Russians take casualties but continue the attack. 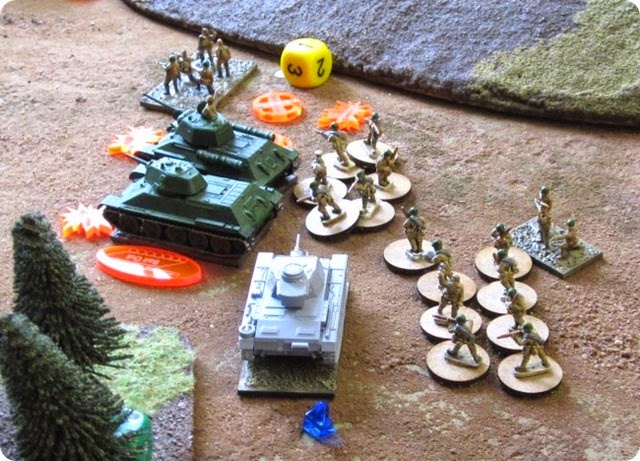 The Russian infantry swarm over the Panzer and destroy it. 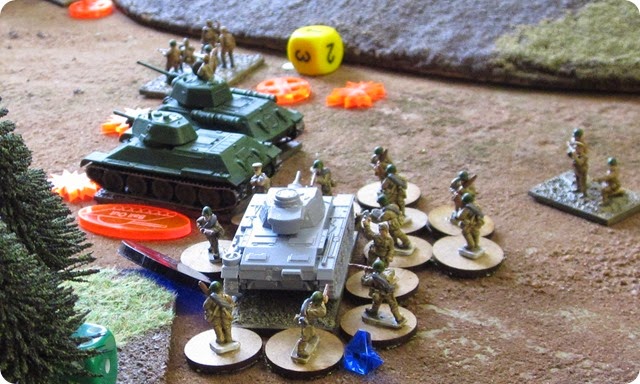 The game ended at this point, the German player saying that he had caused the Russians losses, he had been unable to stop them and now down to only one Panzer and two squads of Pz Grenadiers, he would be overrun. So rather than allow that to happen, he would withdraw and live to fight another day.

This was the first play-test game using artillery (mortars) and now all the players want mortars in their army. Certainly this was the first time that the Russians got their act together, choosing the right army order and keeping the attack going. Probably sending the T34’s out into the middle of the table early on in the game was a big mistake.