Well after weeks of preparation, both armies were fully painted and we headed off to the Society of Ancients battle day at Sycamore Hall, Bletchley.

There were 15 games in progress, all fighting the same battle but using different rules. The only other game using 6mm figures was the battle being played under Warmaster Ancients and they had twice as many figures as we had.

It was all very tight and we had no real space to display all the bumf that I had prepared to go with the game, but there were some railings behind the game that I managed to stick stuff on to. So it looked like this 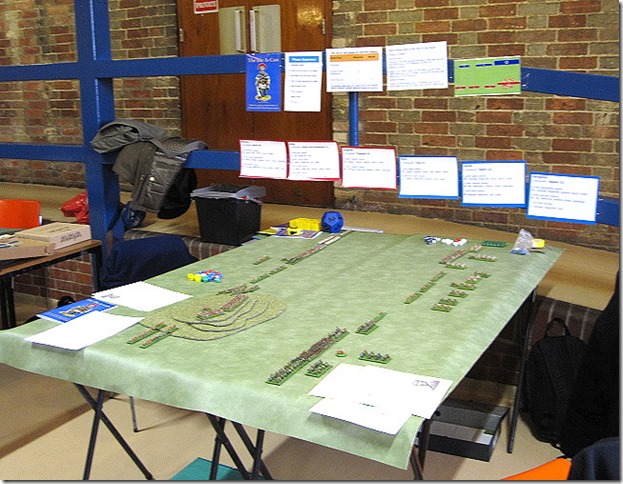 A map of the deployment. Details of the scenario, here. 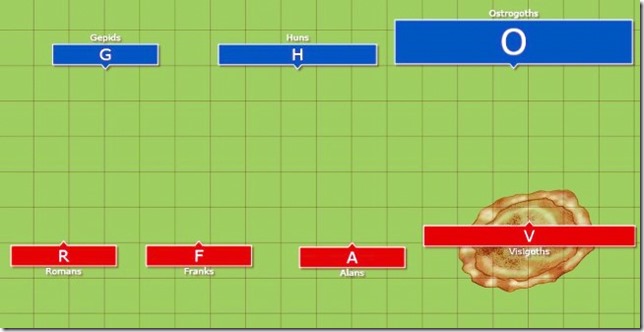 Now this is a picture of the first turn, a mass of Ostrogoths approaching the hill. As has been proven from previous try-outs of the battle, the best strategy is for the Ostrogoths to try and force a passage through on the right flank of the hill. This time the Ostrogoth player massed four units (of the six that he had available) of cavalry and was opposed by two units of Visigoth cavalry. 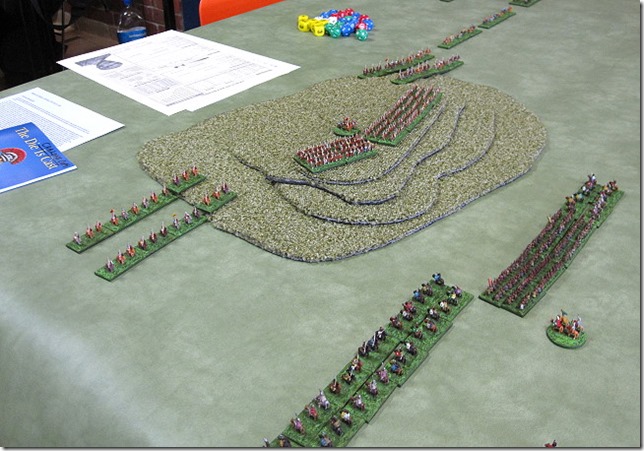 Contact is made, two units of Ostrogoths against one unit of Visigoths

Now a feature of the Die is Cast rules are that in subsequent rounds of melee, additional ranks of cavalry can join the fight, so both sides now throw in another cavalry unit each into the combat on the right of the hill. 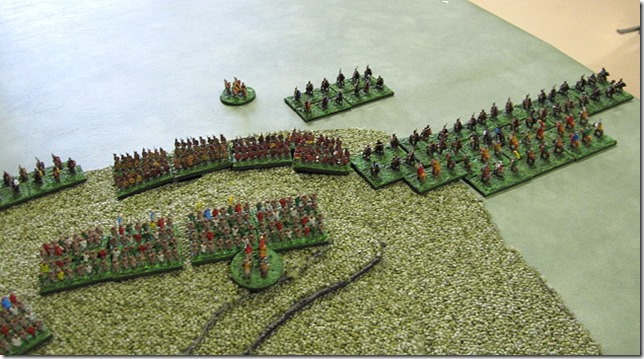 The result cripples the Visigoths, although both sides lose 2 bases of cavalry in the combat, the Ostrogoths outnumber their enemies by 2:1 and so can afford to exchange losses knowing that at this rate, some of them will be left alive when all the Visigoth cavalry are dead. 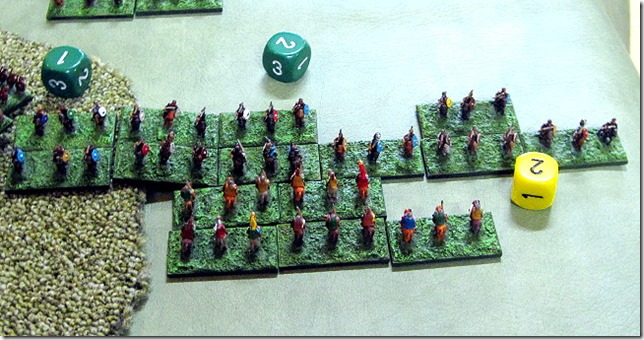 In the next round of combat, the Ostrogoths add another unit of cavalry to the fight but still mange to lose the combat and one of their units of cavalry is forced to retreat. That still leaves three units of Ostrogoth cavalry fighting two rather beaten up units of Visigoth cavalry. 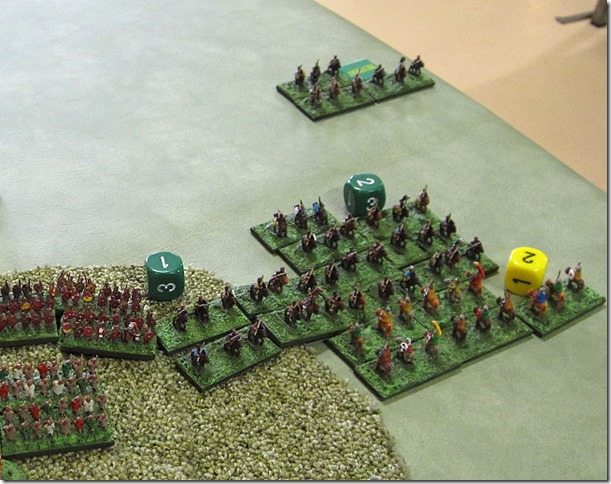 But the serious combat begins on the hill. It is vital for the Visigoth infantry to beat the Ostrogoth infantry before the enemy cavalry (which looks increasingly certain to win on the flank) is able to turn onto the flanks of the Visigoths and beat them. The Ostrogoths reinforced their attack with a unit of cavalry, forcing the Visigoths to stand and take the charge but cavalry attacking uphill is still not effective.

Although the Ostrogoths won that round of combat, it was not enough to upset the Visigoths, who were being led by their King Theoderic.

Then in the next round, the Ostrogoths throw another unit of cavalry up the hill into fresh Visigoth infantry, lose the combat and are broken. Like a wave, the fear spreads thoughout the Ostrogoths and both units of their cavalry and all their infantry flee down the hill. However on the right of the hill the Visigoth cavalry has been destroyed, leaving the flanks of the victorious infantry wide open. On the plus side, two of the Ostrogothic cavalry units are so damaged that they are blown and cannot advance further, another of their units of cavalry has headed off in wild pursuit of the routing Visigoths and the remaining Ostrogoth cavalry unit is being persuaded to stop their retreat and head back to the fight. 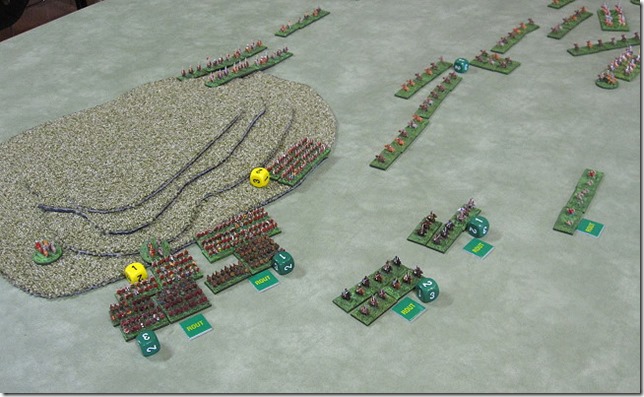 But the Huns have advanced through the centre of the Roman forces, swept the Alans aside without even having to fight them. Now they have swung round to attack the flank of the previously immobile Romans (with great success) and attack the pursuing Visigoths. 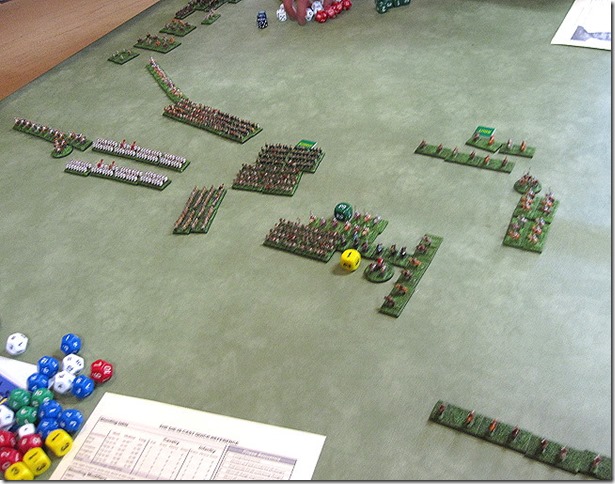 Whilst two of the Visigothic infantry units continue the pursuit of the fleeing Ostrogothic infantry – deaf to their commanders orders to halt the pursuit. The hill is now attacked from three sides and the remaining Visigoths crumble under the assault. 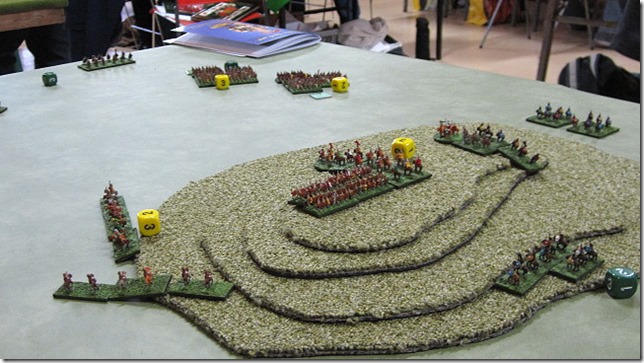 The Roman sub-commander, having led the centre is pursued and overrun with his remaining unit of cavalry, dying in sight of Aetuis now leading his legions against the Hunnic right wing. 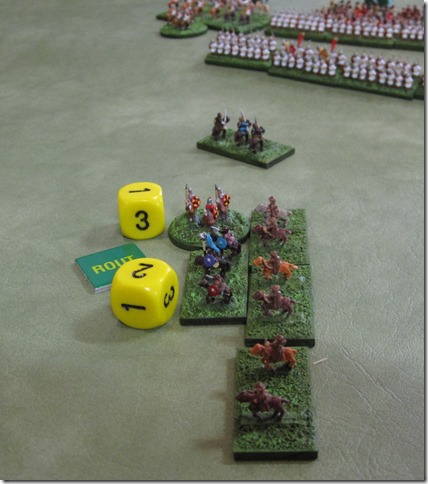 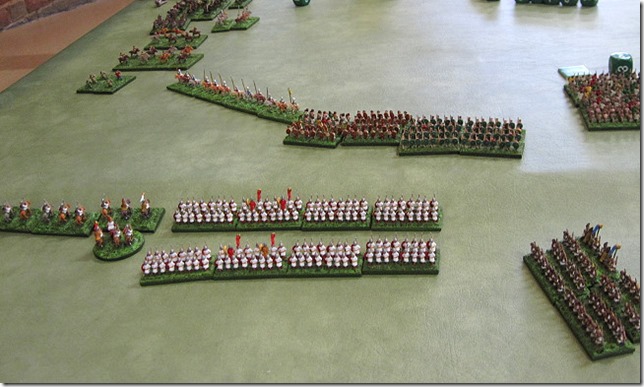 But Aetius was unsuccessful, Gepid lancers destroyed the elite Roman cavalry and the Frank/German infantry fought the legions to a draw.

So with the hill taken by the Huns, the Roman centre smashed and the Roman left unable to make a difference, we declared the game a stunning victory to the Huns.

Why did it happen? Well the victory of the Ostrogoth cavalry on the right of the hill was the start of it. The Roman forces just cannot afford to fight a game of attrition. The Romans really need to win on the right and then be able to successfully attack the Huns in the centre and the Roman left can support them in that. But the Romans cannot win the day on their own.

In points terms the Huns have a slight advantage in points, 1800 against the Roman 1700. It might be interesting to add another 100 points of troops to the Roman side and see how an equal points battle will go.