Hunt the Tiger at BRITCON

Veni Vidi Vici will be presenting the Hunt the Tiger participation game, at Britcon 2016, UMIST, Manchester, M1 3NL on 13th and 14th August (Saturday and Sunday).

This scenario for the Action All Fronts WW2 rules, is taken from the film Fury, where one Tiger ambushes four Sherman tanks, destroying three of them before itself being destroyed.
The scenario begins with the Sherman's moving in column along a road when  a Tiger tank opens fire from behind a hedge 800m away. The Tigers first shot destroys one of Sherman's, then its a race for the other Sherman's to close with and take-out the Tiger. During play-testing we ran through this scenario many times. Without a hero leading the Shermans, all the Shermans are destroyed by the Tiger. With a level 2 hero commanding the Sherman 76, the Tiger is destroyed, with one or two of the Shermans still in action.

A view of the tanks 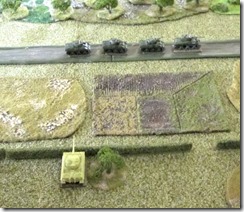 View from the Tiger

An interview with the author Steven Zaloga on the accuracy of the film Fury. Makes for an interesting read.